GURUVAARAM, PRADOSHAM, 2ND DECEMBER, 2021. With the family (From left- Smt. Rajalakshmi, myself, Sri. Vidyasagar, Sri. Sathyan and Ms. Maithreyi) who presented the Veena belonging to Smt. Renuka to me ( approximately 30 to 40 years old, made of fine jackwood). Thank you so much!!
I completed the translation and uploading of  the final chapter of Srimad Bhagavad Bharathi this morning. Within a couple of hours I  received the unexpected divine gift of Veena (embodiment of Goddess) played over the years by Smt. Renuka  from the lovely family who are friends of our mutual friend.
I request dear most readers to kindly go through Srimad Bhagavad Bharathi slokas. I am one of the many devotees who has experienced miracles by reading SBB.
During the first Vardhanthi of Bhagavanji in 2000 I performed in the ashram. A bird-like chirpy female voice sang along every nuance of my playing. Whether it was a krithi or even ragam, thanam or kalpana swaram the divinely melodious voice closely followed each and every note, curve and creation that came from my Veena. The audience started looking around to see who was singing so melodiously, especially merging with the tone of my Veena. Mathaji asked me to stop abruptly and when I stopped even the voice stopped. People were openly stunned and some went outside the mandapam to search for the singing woman but could find nobody.
When I started playing again, the singing would also start along with my Veena. Finally after my concert Mathaji in Her speech declared that the voice we all heard was my "Antharvani" (my inner voice)! Bhagavanji's power made the 'anahatha' as 'ahatha'. 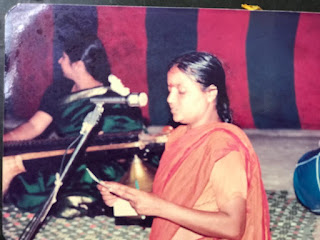 Mathaji speaking after my concert.
"OM NAMO BHAGAVATHEY SRI VIDYAARANYAAYA" is the most powerful mantra that gives fearlessness and fulfills all desires. I write it in sanskrit (likhitha japam) almost everyday. Chanting is equally good.
at December 02, 2021