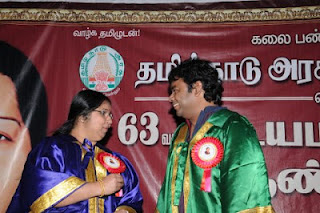 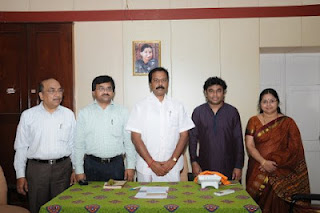 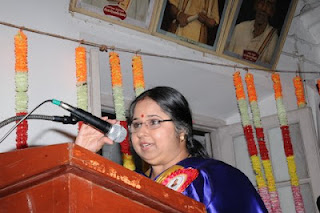 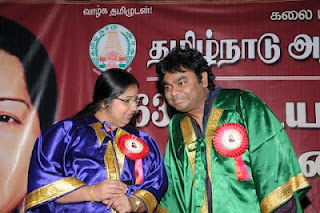 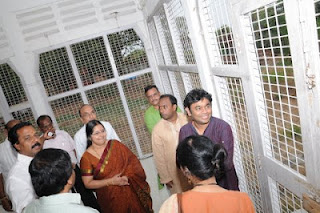 Group photo (2nd):-
Commissioner, Department of Art and Culture, Sri.S.S.Jawahar, Principal Secretary Tourism and Art&Culture department,  Sri.V.K.Jeyakodi, Honourable Minister for Education, Sports and Youth Welfare, Sri.N.R.Sivapathi, Sri.A.R.Rahman and myself.
5th photo Sri.A.R.Rahman expressing his desire to see classrooms and go to the college terrace to catch a glimpse of Adyar river.
at April 24, 2012 No comments: 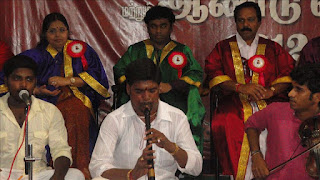 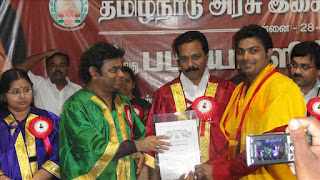 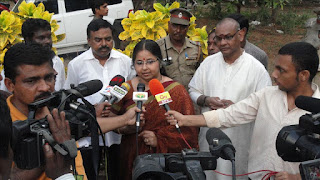 Mr.A.R.Rahman expressed his desire to listen to the students perform. He thoroughly enjoyed their instrumental fusion performance. Before leaving, Mr.A.R.Rahman in his conversation with Honourable Minister and myself stated that he would come back with many plans while specifying that he wished to record talented students for his movies!

Mercury coming out of its retrogression on April 4th is not much of a relief as the planet is going to move towards its debilitation in Pisces on the 6th of April. The delays, obstacles and unforeseen developments in communications for the past twenty odd days..... just the limit!
On May 5th Mercury moves out of its debilitated status and enters Aries, again not a friendly house. The company of an exalted Sun in Aries upto May14th could extract great traits from the planet of intellect, Mercury  to form a great "Budhadithya Yoga'' for any native who will be born during the period of Sun-Mercury conjunction. On May 21st, Mercury moves into Taurus to be in the company of a retrograde Venus, Sun and Ketu.
In all the activity stated above, a lot of positive action and rejuvenation can be expected when Mars turns direct on April 14th in Leo, putting an end to frustrations of all sorts. Saturn's return to Virgo (a friendly house owned by Mercury) is enhanced by the entry   (and subsequent 5th aspect) of Jupiter into Taurus on the 17th of May. The dreaded conjunction of Mars and Saturn between June 21st and August 14th could in all probability be saved by the fifth aspect of Jupiter.
Natal charts (horoscopes drawn at the time of birth) could be altered according to the good or bad deeds we perform during the same lifetime itself!
What is a Dasha or Vimshotthari Dasha and how to get the best out of the Vimshotthari Dasha (planetary period) we are running presently?

Dasha of a native depends upon the placement of moon in a nakshathra at the time of his/her birth.This nakshathra determines the first ever Dasha or Mahadasha in the life of the native.
Nakshathras and the planets they belong to:-

The balance of Mahadasha is determined by the distance covered by the moon in the nakshathra at the time of birth. Each nakshathra has 4 padas and depending on the placement of moon in one of the padas, the remaining padas are calculated to arrive at the balance of Dasha at the time of birth.
The Mahadashas (planetary periods) and their relationship to the 12 houses of a natal chart depends on the planet-owner of the Mahadasha and its ownership/friendship and enmity of the Lords of 12 houses namely Aries (owned by Mars), Taurus (owned by Venus), Gemini(owned by Mercury), Cancer (owned by Moon), Leo (owned by Sun), Virgo (owned by Mercury), Libra (owned by Venus), Scorpio (owned by Mars), Sagittarius (owned by Jupiter), Capricorn (owned by Saturn), Aquarius (owned by Saturn) and Pisces (owned by Jupiter).
The above rashis or houses have to be studied for their respective placements from the Lagna or Ascendant.
When a native is born while the moon is in Mrigashira nakshatram, he/she has started Mars Mahadasha. The Mahadasha is judged by the Lagna or Ascendant and the relationship between the Lord of Mahadasha and Lord of Lagna and other major factors.
How to maneuver a planetary period or Dasha to suit our needs or achieve our goals? 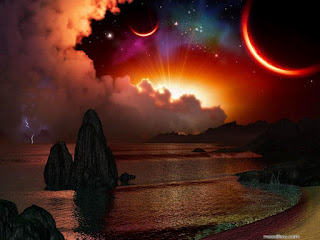 Before that, a brief run through natal houses and their traits to understand what every house  is capable of yielding and the way to extract what we need from them.