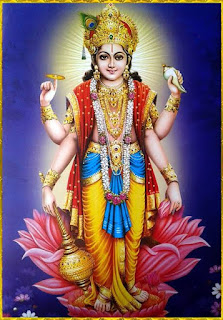 LORD NARAYANHA
(I have spelt 'Narayana' with a 'H' as 'Narayanha'. In Devanagari the second 'Nha' is different from the first 'Na' of the divine name.
It's a known fact that slokas of Lord Maha Vishnu especially Vishnu Sahasranamam activate Agna Chakra as well as the chakras above Anahatha Chakra while Shakti related slokas especially Lalitha Sahasranamam activates Mooladhara Chakra (coiled serpent feminine energy at the base of the spinal column) as well as the chakras below Anahatha Chakra.

The divine name 'Narayanha" physically activates the pressure points in the roof of the mouth by means of the tongue. Consequently the Agna Chakra and the  lesser known Lalana Chakra (situated in the back of the mouth  or root of the palate) of a human being are stimulated and activated.

The Lalana Chakra is a significant chakra owing to its functioning in the storage of the nectar (Amritham) that drips from the Bindu (situated behind one's head, exactly the point where brahmins tie there hair in a tuft). This nectar which drips from the Bindu and falls into the Lalana Chakra is cleansed further by the Vishuddhi Chakra. In cases of a weak Vishuddhi Chakra the nectar surpasses it to fall into the Manipura Chakra (solar plexus chakra). Here the Amritham is devoured and does not give the intended results of liberating the human being. When the divine nectar or "Amritham" is thus purified by the Vishuddhi chakra, it is said to heal even incurable diseases and prolong the lifespan of a human being which explains the following sloka-

The pronunciation of the divine name "NARAYANHA" involves  the tongue's action of hitting the roof of the mouth and with lips apart.

'NA' - the tip of the tongue hits the foremost portion of the roof of the mouth ( right behind the 2 central incisors).

'RA' - the front portion of the tongue hits (in a vibratory motion) on the borderline of the central roof of the mouth.

'YA'- it's an open mouthed pronunciation requiring, the sound produced from the Vishuddhi Chakra (throat chakra) spreading upwards towards Agna (forehead) and downwards in the direction of Anahatha (heart) chakras. The 'Lalana Chakra' which is behind the roof of the mouth is awakened to receive the 'NHA' which is to follow.

'NHA' - The tongue most emphatically strokes the central point of the roof of the mouth and close to the 'Lalana Chakra'.

Therefore the entire roof of the mouth is subjected to activation, directed towards the 'Lalana Chakra', the'Agna Chakra' and the 'Vishuddhi Chakra'.

KHECHARI MUDRA- This mudra achieves the same results as the divine name 'NARAYANHA'. 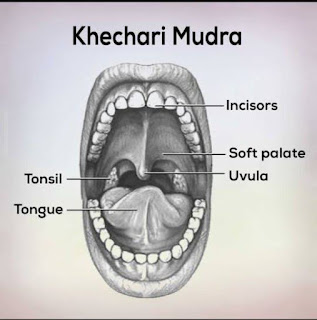