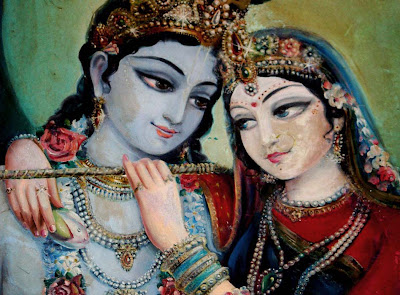 The emotions mentioned above are represented by certain ragas, such as:-


1)Shantha- this rasa is perfectly represented by the raga Shama, Yadukula Kambodhi, Madhyamavathi and Surati to mention a few.


Apart from the above there are other emotions like confusion and chaos which come under the category of bheebhatsa and bhaya.Most of the janya ragas of the vivadi melas would suit such emotions.
a)Suramani (a janya raga of the 48th melakartha,Divyamani)-SRGMDNS,SNDMGRS;b)Thoomala (a janya raga of the 42nd melakartha, Raghupriya )- SRGMNS,PMRGRS; c)Nandanapriya (a janya raga of the 72nd melakartha Rasikapriya)- SRMDNS,SNDMRS;d) Rakthakshi (janya raga of mela raga Rasikapriya) -SRGMDS,SDMGRS;e)Srikanthavilepini (janya of the 54th mela raga Viswambari)- SRGMDNS,SNDMGRS etc.convey the emotions of confusion and chaos.Even the 2nd melakartha Ratnangi and the 47th melakartha Suvarnangi could be included in the category of chaos and confusion.
Feelings of regret (under the bhaya category) are perfectly conveyed by Dwijavanthi.Feelings of fear born out of abuse and supression of feelings are conveyed by Sarasangi and Revathi.

Shringara is a category that consists of many stages and emotions.Feelings of unexpressed and budding love are characterised by Brindavani.Advancement towards verbal expression of love is conveyed by Kapi and further developments are conveyed by Behaag,kamas and Karaharapriya, in that order.

Shantha, peace after a fight or quarrel is represented by Shama; tranquility as a result of meditation is conveyed through Madhyamavathi; striving for peace and finding a solution to a conflicting situation are conveyed by Surati.


Anger (Rowdra) is born out of various situations and emotions.Anger is not the same in all the situations, the emotion is reflected differently based on events,people,nature and situations. Righteous anger born out of masculinity and valour is represented by Athana and Panthuvarali. Anger due to quarrelsome nature is conveyed by Chalanata.


Veera's subdivisions like pomposity is conveyed by Balahamsa (janya of the 28th melakartha,Harikambodhi)- SRMPDS,SNDPMRMGS; heroism by Athana; and valour in a fit of rage by Hamsanandi.


Karuna ,compassion out of pity is conveyed through Mukhari and Saveri; compassion due to overflowing love is represented by the raga sahana, Kanada and Hindolam.

Dear Gayathri ji,
Very nice article. Every raga you mentioned under each emotion (including different varieties within the same emotion) is so very apt. Many people think there are no apt ragas in our music for hasya rasa. But you have such a great list.
I must mention my personal experience with the raga Subhapantuvarali. This raga is so serious that I can hardly bear to hear it for more than a few minutes. Evokes a very sad feeling. Over time, I have gotten over than and I can listen to a full alapana now, although it is still not my favorite. A friend of mine loves this raga very much. She agrees it evokes sad feelings, but somehow still enjoys it very much. Wonder if it has to do with the personality of the listener.
Looking forward to more posts.
Thank you,
Music Lover

Dear madame,
That was a very good article for the veena student like myself
thank u madame
keep writing
with love
mala

Great article. It's so wonderful that you share so much information in each one of your article. Your writing is truly a feast to music lovers.
Jayasri

Dear Music Lover,I agree with what sad ragas can do to you.Subhapanthuvarali also has a tinge of vairagya in it, even though Sri Muthuswami Dikshithar in his krithi Sri Sathyanarayanam projected the splendour of Maha Vishnu through a melancholic raga!
Thank you for your appreciation,Gayathri

Dear Mrs.Jayasri,It is my pleasure to share what little I know,thank you very much for your kind appreciation.Gayathri

Thanks a lot, Madam, for such an informative article. I never knew that there were these many ragas for each rasa. Indeed, it was very educative. Thanks a lot!

Dear Mr.Srinivas,Thank you very much, the pleasure is mine!

Hi, nice information about Ragas and Emotion. Check my blog and leave your precious comment too...

Thank you very much. I will visit your blog too!

Excellent article,but it will be great if you can also explain why the ragas or rather what is it in the constitution of the raga that aligns it to a particular rasa? For example, Bhibhatsa represented by Rishabhapriya.
I also noticed that hasya is represented by ragas that eschew one or more consecutive swaras,typical of Kuntalavarali. Is that the case?
It will be great if you can explain this to us, will help us improve our knowledge and appreciate ragas better.

Dear Sri.Karthik Krishnaswami,
Thank you for your kind appreciation. Every raga creates a mood and ambience (which explains ragas pertaining to timings/seasons/emotions). There are 'vivadi' ragas, the janyas of which create feelings of alienism. tension and even confusion. The term 'Vivadi' itself means 'vivadam' (discordant).
It is the feel that matters and I do not know if there is a clinical approach to this feeling. I wish I could ask great saints like Thyagaraja why he had composed "Darini Thelusukonti" in Suddha Saveri ('Durga' , the raga meant to invoke Goddess), or "Kanugontini!" in Blihari ("adbhutha rasam", wonderment),Shanthamu leka in Shama ("shanthan" peace, tranquility) Sri Muthuswami Dikshitharis "Ardhanaareswaram" in Kumudakriya ( adbhutham),and Sri Shyama Sastri's "Kamakshi" in Bhairavi (spiritual upliftment) etc.
I do not know of particular swara alignments, I go by the feel. In my search for facts, if I learn that there are other basics for rasa, I will surely post the subject immediately!
Regards,
Gayathri

I have always been intrigued by this concept of associating a raga with a rasa.Since you mentioned Sri Tyagaraja,one thing that always crossed my mind was the different flavours of a single raga that he has protrayed.I felt that a very contempative 'Ela Teliya Leru' In Darbar against a sprightly 'Yochana Kamala Yochana',or even 'Adigi Sukhamu' and 'Alakalalla' are different themes and musically different compositions in different moods.I wonder if it could be the case in some way that a great composer like Tyagaraja could have created these varying compositions in different flavours in a single raga to underline the fact that a raga can portray multiple rasas?

Dear Sri.Karthik Krishnaswami,
Great observation. You are very correct! While a Subhapantuvarali or a Mukhari could emanate joyous vibrations, a Mohanam could leave a trace of melancholy in a listener.
These dimensions are revealed by the varied moods of the artistes/composers.

Wow I was looking everywhere for an article that relates ragas to emotions.. This is the best-written article on this topic that I've seen so far. It is written such that even a layman can understand it.

Thank you very much for the wonderful article!

Dear Sri.Prahlad,
Thank you for your kind appreciation. I am very happy that you liked my article.
Regards,
Gayathri

The contents of this article were exactly what i was looking for. . .

could ranjini be considered as a raga imparting bliss or romanja ???

Dear Sri.Kishore,
I am glad you have found the content you are looking for. Your interpretation of the ragas are correct. At the same time any flavour could be given to any raga. It all depends on the creative expertise of the artiste.
Regards!

Hi Mam, Can you pls guide us on raagas that can help in curing/ reducing the effects of variuos diseases and the songs recommended against each raaga... Hope, I'm not giving any burden to you...
The objective is to recommend to a few people and help them overcome the troubles... Regards, Kumar.

Dear Sri.T.L.K, I shall post another article on the same at my earliest convenience.
It is a pleasure thank you, not at all aburden!
Regards!

Thank you so much Madam for this wonderful Informaticle article , This kind of article help us a lot to learn about the theoretical information about ragas and also Navarasa.
i am a learner of classical dance ( bharatanatyam) so please post this kind of information's and guide us to know something about this all...

Dear Madam,
Well researched article.Vivadi Ragas are difficult to enjoy for few people as they produce a kind of disturbing feel (Notable exceptions being Jagadanandakaraka, Paramatmudu velige by Thyagabrahmam)... Even late Shri. Semmangudi Srinivasa Iyer (called then Non-veg ragas) avoided these ragas as much as possible... But over a period of time after listening to numerous Dikshitar Kritis (like Rama Saraswati, Bhaktavatsalam -ironically sung by Shri.Semmangudi), Bagayanayya etc. I have developed a liking for these ragas as these ragas to can evoke positive feelings in one's mind... Vivadi Ragas, sung the right way, are truly pleasing...