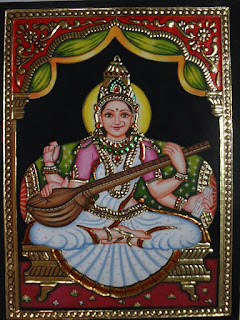 Resonance of original acoustic Saraswati Veena comes from pure Jackwood, the grains of which absorb the prana shakthi (life-force energy) transmitted by the player.
Electric 'Veena' used by magnetic mike depends on mike system for its sound (due to the magnetic mike's inablity and incompetence in picking up Jackwood which absorbs the life-force energy of the player)  and that too only in terms of volume while failing to convey the true tone of Veena.
Smaller size electric Veenas are used (the veena dandi is so small that the frets are narrowed down offering  scope for super-fast left hand movements) for gimmickry. The player exploits the abnormalities provided by the smaller size Veena in playing crazy speeds very easily (which is restricted on the normal sized Saraswathi Veena).

In the absence of integrity in clearly distinguishing between acoustic and electric Veenas ( like in the case of electric and acoustic guitars), today,it has become the responsibilty of a Veena lover to distinguish between an acoustic and electric Veena. An electric 'Veena' player uses the abnormal facilties provided by an electric 'Veena' to his/her advantage for example by a)producing sound through left hand alone and without plucking with right hand or b) rendering incredibly speed/fast/jump notes on a small sized electric Veena. Such perks are offered by the electric 'Veena' and often misinterpreted as player's expertise in instrumental technique.
Similarly an acoustic Veena's lack of artificial smoothness like that of an electric Veena  apart from certain natural  imperfections like external noises and hand movements (fret noises) are purely instrumental features and not to be considered as flaws in the rendition of the acoustic Veena player. 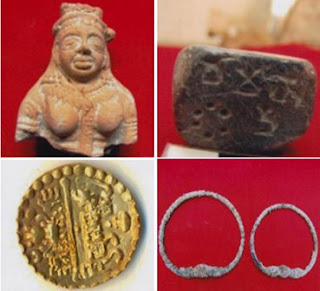 The above artifacts belong to the period of Mahabharatha. Likewise the original Saraswathi Veena is from the ancient era and vedic times. They are meant to look and sound rustic. They are not processed.
In simplified terms it's pulihara/puliyodarai versus pizza.
(About tantriks to be continued in Saraswati Veena-18)

SHE'S NOT THERE BY SANATANA- 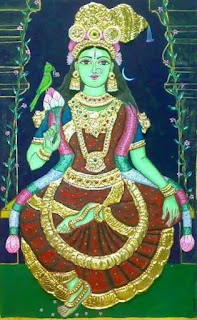 "She looks so cute, my God.... too cute!!"
I looked around, confused, "Who?!"
"Meenakshi Amman!!" There was a look of sheer awe, joy and fascination on his face.
"You mean Goddess Meenakshi?!" I asked him in bewilderment.
"Ya!!" he nodded vigorously.
I quickly glanced at the poojari (of a famous temple near Chennai) standing next to me. The poojari nodded in agreement. It was the poojari who introduced me to the tantrik before the conversation started.
"Cute?!" I felt a twinge of resentment at the word "cute" in describing the Goddess. Before I could react the tantrik threw another shocker, "Kamakshi is not like that, She's ferocious, like Kali! But Meenakshi... oh God....She's damn cute!!" He exclaimed in joy, recalling the vision.
While I was struggling to digest his choice of vocabulary in describing the Goddess the tantrik diverted my attention, "You people see the main idol (moola vigraham) in temples whereas we tantriks feast our eyes on the actual core form which is subtle and a few inches in front of the main idol."
My eyes grew wide in wonderment, "You actually see the Goddess?!"
"Not in the big form but in a miniature form, full of light and life, pulsating and moving, in colours, in light..."
I once again glanced at the poojari who quickly nodded in agreement.
"Wow!!" I whispered, the sense of wonder I felt was overwhelming.
I couldn't believe that this less than ordinary looking man was a tantrik in the first place and that he had the ability to see the Goddess in Her sookshma (subtle) form.
The poojari interrupted, "He can also scan everybody's auras and he is an expert in measuring the ascension of kundalini in any person".
"Wow" this time the tantrik got my full attention.
Looking grim all of a sudden the tantrik said, "People need to be aware of their spiritual potential and be wary of their energies, the kundalini energy can be stolen, you know?"
My brows knit in consternation, "Stolen?! How??"
The Poojari told me with a smile, "There's a lot about this subject, please come home for some coffee, we will discuss."
A TANTRIK IS SOMEBODY WHO'S WELL-VERSED IN RELIGIOUS TEXTS, RITUALS AND PRACTICES. IT'S A VERY POSITIVE THING. LIKE EVERYTHING ELSE IN THIS WORLD, EVEN TANTRA HAS A FLIPSIDE TO IT. THERE ARE PRACTITIONERS WHO USE TANTRA FOR NEGATIVE PURPOSES AND DON'T BAT AN EYELID IN CAUSING HARM TO A HUMAN BEING IF/WHEN NECESSARY IN ORDER TO ACHIEVE THEIR DESIRED TARGET. THESE PRACTICES ARE COMMERCIAL TOO AND RITUALS ARE CHARGEABLE AND CONDUCTED ON BEHALF OF SOMEONE ELSE FOR A COST.
SPECIFIC YANTRAS, MANTRAS, BEEJAKSHARAS AND ARTICLES ARE USED IN THESE PRACTICES. IN THE WESTERN WORLD SUCH PRACTICES EXIST AND ARE KNOWN AS 'BLACK MAGIC'. 'VOODOO', 'SPELL' ETC.  THE OUIJA BOARD WHICH IS USED IN CONTACTING SPIRITS CAN BE INCLUDED IN THE CATEGORY OF NOT-SO-RELIGIOUS PRACTICES.
IN INDIA THERE ARE DIFFERENT TYPES OF TANTRIKS. A TANTRIK CAN LOOK LIKE YOUR GUY NEXT DOOR, A GOVERNMENT EMPLOYEE, A BANK CLERK DRESSED IN PANTS AND SHIRT. THEY ARE NOT LIKE THE ONES SHOWN IN THE MOVIES, SPORTING A LONG BEARD, A THICK MOUSTACHE, FIERCELY GLOWING RED EYES, DRAMATIC LOOKS OR A GUTTURAL TONE TO MATCH. HE COULD BE A PEDESTRIAN WALKING PAST YOU ON THE ROAD, THE EYES ARE GENERALLY KEEN, OBSERVANT AND INTELLIGENT.