ANANDAAMRUTHAKARSHIHI- AMRITHAVARSHINI (SRI MUTHUSWAMY DIKSHITHAR)
Rendered by Sri. T.M.KRISHNA
AMRITHAVARSHINI (RAGA FOR ACTIVATING SECRETION OF MELATONIN)-Ragas are activated when 'jeeva swaras' (main notes of each raga containing the life or core of the raga) are stimulated through perfect rendition by voice or musical instrument. Veena, a divine instrument and the inner voice of a human being is ideally suited for activating ragas .
Amrithavarshini is popularly known for invoking rains. The name of the raga means Amrith- elixir, Varshini- showers. This raga is most effective in drawing out the elixir from the agna chakra (pineal gland), scientifically known as Melatonin. Activation of the Raga Devatha of Amrithavarshini kindles the secretion of Melatonin. Sri Muthuswamy Dikshithar in His krithi states-ANANDAAMRUTHAKARSHINI- Draws out the bliss giving elixir
AMRITHAVARSHINI- showers of Elixir.
The saint composer hints in the madhyamakalam-"AMRITHESHVARI SALILAM VARSHAYA VARSHAYA VARSHAYA"!
In the real sense Sri. Dikshithar pleads for great showers (Varshaya repeated thrice)  of abundant water (elixir) from the pineal gland in his composition, "Anandaamruthakarshini Amrithavarshini."
RAGA THERAPY OF AMRITHAVARSHINI- Rains (macrocosm), activation of melatonin (microcosm), deep sleep, calmness and tranquility of mind.
at January 24, 2022 No comments: 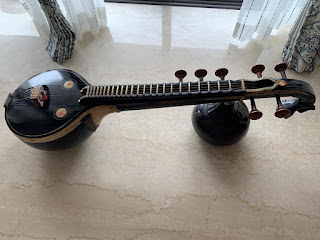 The agna chakra (pineal gland) secretes the wonder hormone, Melatonin to its maximum measure during the divinely auspicious time of the day called 'Brahma Muhurtham' (Brahma Muhurtham today is between 5:17 AM to 6:05 AM).

Practice of Veena flawlessly by adapting the correct posture during Brahma Muhurtham accelerates the flow of ambrosia.

SWARA BHUSHANI (A 1989 telecast on Doordarshan)

In an episode by One Minute Film Productions, (produced by Sri.Govind Nallappa and Sri Ravichand Nallappa, directed by Sri. Murali Nallappa) featuring Dr. R.K.Srikanthan (Purandara Dasa Krithi) there is a short and crisp composition by Dr. M.Balamuralikrishna. I was asked to sing as well as play the Veena (enacted by Bharathanatyam exponent Smt. Sujatha Srinivasan) in this episode.
(Carnatic episodes of Swara Bhushani and Raga Sudha Rasa telecast by Doordarshan are available on Plan B Presentation- a YouTube Channel)
at January 18, 2022 No comments: 'GAMAKAM'- PULLING THE STRING BACKWARDS IN ORDER TO TOUCH THE JEEVA SWARA.....
The video shows oscillation (gamakam) of Veena string. The practitioner's breathing slows down when the jeeva swara (core note of the raga) is touched and sustained (not directly, but by pulling the string from the previous swara or note). While sustaining the jeeva swara the breathing almost stops which is known as 'kumbhakam'. Constant practice of this leads to activation of kundalini. It is important to note that this practice is not meant to be clinical. This has to be practiced by rendering frequent raga phrases which and pause at sensitive notes through string-oscillation (gamakam). Oneness of mind and resonance is achieved through this practice which is termed as 'yoga'.

Melatonin is a hormone which is secreted by the pineal gland or ajna chakra. This hormone is said to enhance the quality of sleep, extend the duration of sleep and opens a hidden channel in the brain from where a gush of tranquility engulfs one's mind.

The amritham or ambrosia which is secreted when kundalini shakthi reaches the sixth chakra (ajna chakra) is termed as 'melatonin' according to science.

It's hard to believe that melatonin tablets can replace the Ultimate Bliss experienced by the kundalini yogis.

Medical research (into melatonin and methods of its enhancement) has concluded that slow, pleasant, essentially classical and instrumental music stimulates melatonin in a big way.

The practitioner who is a spiritual aspirant need not dwell into fast or speedy phrases. Slow and long oscillations (gamakas), especially slow oscillation and sustenance of a swara or a note pulled from a previous swara (preferably from behind 2 or more swaras) cause the practitioner's breath to slow down while pulling the string and breath is suspended when the string is held at a certain degree of oscillation in order to touch the perfect jeeva swara.

Kundalini yoga attained through Veena playing taps the most evasive hormone, which is the actual melatonin.

(The 36th sloka of Soundarya Lahari is for the activation of ajna chakra or the pineal gland).