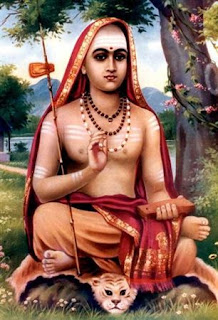 (Meaning:May the divine Mother with Her slender waist girdled with jingling mini-bells,body slightly bent in the middle by the weight of Her breasts resembling the frontal globes of the fore head of a young elephant,Her face blooming like the autumnal moon and Her four hands holding bow,arrow,noose and goad and who is the pride of Shiva,manifest Her presence before us!)
In Maha Periyava's lectures,(Soundarya Lahari,Chapter 55"Curing Illness"),He states that the meaning of certain words (in mantra or a poem)is one thing but the result produced by their sound is quite another,with no connection with it(with the meaning).Sugar is powdered to make a number of objects like little boxes,dolls.Periyava says we can make we can make even things looking like chillies with it.But these chillies are sweet because the substance out of which they are made is sweet.The substance called sound,or the potency of a mantra,is one thing and the "doll made of the verse" is another.
The benefit of reciting the 7th sloka is to fascinate royal personages and overcome enemies, simultaneously,one can experience how the sound generated by portions of the sloka yield results according to the sound of the sloka,for e.g., "puramathithuRAAHO purushika" of the last line of the 7th sloka, is meant to destroy the evil effects of Rahu,or an afflicted Rahu in one's natal horoscope.The recitation of this sloka is not only prescribed for Rahu afflicted natives,but will ultimately lead one to Goddess Kamakshi of Kanchipuram, (the first verse,"kvanathKAANCHIdhama) to taste the Supreme bliss and nectar of Her Saannidhyam.There is a hint here that the subject of the hymn is Lalithaamba because of the word "Kanchi"used in it.The deity mentioned in the Srividya- tantra,the deity with all the attributes and weapons of Lalithaa Tripura Sundari,can only be the Kamakshi of Kanchipuram.That is why the saying:even if you mention the name of the place you must not mention the name of the person.In this hymn,though Amba's name is not mentioned,itseems the Acharya has perhaps suggested the name by mentioning,or hinting at Her place through the term "Kanchidhaama".
Kamakshi, Goddess of tantra and said to be the domineering and powerful counterpart of Her spouse,Lord Ekambresa, is "Purushika"(concluding verse of the 7th sloka.) It is amazing how every meaning ,every sound vibration and every benefit yielded by the slokas show instant results and how one should tread carefully before choosing the sloka for "japam".Soundarya Lahari recited as a whole on a daily basis is different from choosing any particular sloka for "japa" purpose.Before choosing,one should always keep in mind that Soundarya Lahari is a live wire!
Maha Periyava's assurance that the 100 slokas are a treasure trove,into which the devotee can dive deep any number of times and come out with dazzling discoveries.Maha Periyava further asserts that it is the devotee's IQ and God-guided instinct that will lead him to exotic treasures of Soundary Lahari,in other words,the freedom and facility to interpret and implement Soundarya Lahari is given to every devotee!
at April 17, 2009

Congratulations! The choice of the title, the flow of language,the choice of matter and what was told, just about all of them were truly superlative. The pace with which it was told was good as well. I love the title Jasmine Strings.
You can even call them Mallela Haralu.
Congrats again

My dearest sister,Sham,Your appreciation means the world to me,thank you so much for your love and support!

Sathya from Delhi...
I was the most happiest person to get a reply from you... i couldn't believe.

Ok mam, here I go.... About verses of soundaryalahari.. I have listened to my mom singing it everyday. But now understood, the real essence is to actually feel the meaning of every word in it, and giving it out whole heartedly.

The first time i followed and listened to music was when I listened to Hindolam, played by you in an album. The beauty in which the notes measure the octaves, made me to feel the warmth and magic of music especially Hindolam.

More to it how lyrics, Ex. in Eti Janmamithi By Sri Thyagaraja, the nuances of framing the lyrics into beautiful varali, really they are genius.

In Amba Kamakshi swarajathi, how brilliantly Shyama sastri placed the lyrics,Anu Dinamu Maravaganee... in a soothing bhairavi. Realising the meaning of the composer, and his boundless devotion to Devi in lyrics, really made me to feel and enjoy how music gives meaning to words and generate what Bhakti actually means rather than what we see in daily life.

Gayathri Aunty,
I am reading your posts one by one and understanding little by little of it. It would be so nice if you would also post discussions on compositions by our Trinity.... and bring out the essence of them, which made them to reach Divinity through music.

Dear Sathya,
Thank you again and am happy to know you are so well informed.
I will certainly include compositions of the trinity saints as I keep proceeding with my blog,Gayathri

Your blog brings out the hidden meaning and inherent beauty of the Soundarya Lahiri.

You have made a reference to the book 'In Maha Periyava's lectures,(Soundarya Lahari,Chapter 55"Curing Illness"),'. Could you please let us know the name of the book, so that we can avail the same and read it to understand the excellence of each of the 100 verses of Soundarya Lahari.

Your blog is an eye-opener to any spiritual aspirant / veena student.

Looking forward to more such information from you.

The book is named "Soundarya Lahari" interpretation by Pujyasri Chandrasekharendra Saraswathi (in english).
It gives me great pleasure in sharing whatever little I know.Thank you very much,Gayathri

I just viewed this blogspot few days before and didnt go into older spots, I was thinking that I should asked madame to write about Soundarya Lahari,I just read today the language is so high and it shows the profieciency and the command you have on the language, I enjoy your language, your lecture and the way you have expressed the meaning of the slokams, I would like to hear more from you on the important slokams of Soundarya Lahari
with love
mala

Can you please tell me if the book you mentioned here is available in Giri or somewhere else? I would highly appreciate if you can let me know where i can source this book.

Sorry Sri.Ramesh, I somehow missed seeing your request. It is a private publication and not available anywhere, one of the reasons why I have provided the text on my blog!

Dear Gayathri madam,
I just started learing Soundarya Lahari and was looking for an online site where I can find accurate wordings of Soundarya Lahari. I would appreciate your help.

Dear Ms. Lakshmi,
All the best and my pleasure!

Dear Gayatri madam,
I am a bharatanatyam dancer raised in the US. I have loved the Shyama Shastry Swarajathi Amba Kamakshi all of my life and would like to create my own choreography. However being raised in the US, translation and understanding the meaning the composer is trying to get across has been difficult. Any suggestions as to where I can acquire the translation of this beautiful composition.

Dear Ms. Priyadarshini,
I am very happy to know that you are a bharatanatyam dancer.
I am sure there has to be a translation somewhere, I think Sri.T.K.Govindarao has published the notation of this Swarajathi along with sahithyam.
Regards,
Gayathri

Dear madam, this is so informative knowing more about the goddess whom we pray with all our devotion.But have one doubt.Pls clarify. is it compulsory that we have to get the yantra prepared for worshipping matha with the help of soundrya lahari slokas? is it prohibited to chant only sloka? And for some of them it is said that they should be got from a guru. then is it necessary to get it only from a guru?
Thank you madam,
Sushma

Appreciate the information you have provided on Soundarya Lahari.
I am 5 months pregnant and I already have a son.
Can you please provide the relevant sloka which I can recite for having a baby girl. One of my friends suggested reciting all the slokas, but I am not sure.

I am fortunate to cross this way.