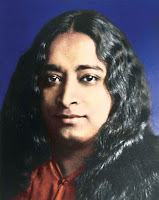 As I walk by the cream of glamour and richness in San Diego, I feel far removed from all of it. To know that Encinitas is not very far off from San Diego,(it is the place where Sri Paramahamsa Yogananda set up the Self-Realization Fellowship Colony in Encinitas in the year 1937) is a great consolation!
During the early years of Sri Paramahamsa Yogananda in America,He had combed the coast of California in quest of a small site for a seaside ashram.Whenever He had found a suitable location some obstacle had invariably arisen to thwart Him.In establishing the ashram in Encinitas,He saw the fulfilment of Sri Yukteswar's long-ago prophecy:"a retreat by the ocean."
Sri Paramahamsa Yogananda in His metaphysical meditations has spoken of nada yoga too.
He says:"Listen in the Cosmic Sound of AUM,a great hum of countless atoms,in the sensitive right side of your head.This is the voice of God.Feel the sound spreading through the brain.Hear its continuos pounding roar.
Now hear it and feel it surging into the spine,bursting open the doors of the heart.Feel it resounding through every tissue,every feeling,every cord of your nerves.Every blood cell,every thought is dancing on the sea of roaring vibration.Observe the spreading volume of the cosmic sound.It sweeps through the body and mind into the earth and the surrounding atmosphere.You are moving with it,into the airless ether,and into millions of Universes.Meditate on the marching spread of the Cosmic Sound.It has passed through the physical Universes to the subtle shining veins of rays that hold all of matter in manifestation.
The Cosmic Sound has entered the realm of Cosmic rays.Listen to,behold, and feel the embrace of the Cosmic Sound and the Eternal Light.The Cosmic Sound now pierces through the heartfires of Cosmic Energy and they both melt within the ocean of cosmic conciousness and cosmic joy.The body melts into the Universe.The Universe melts into the soundless voice.The sound melts into the all-shining Light and the Light enters the bosom of infinite joy!"
at May 18, 2009

Email ThisBlogThis!Share to TwitterShare to FacebookShare to Pinterest
Labels: Ashrams