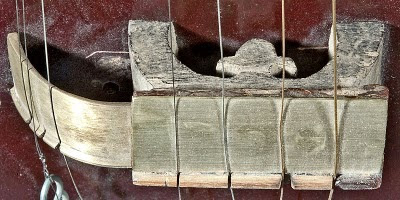 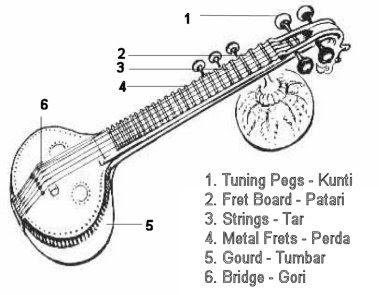 Parts of Veena
'Naadam' (resonance) is the life of veena. A veena devoid of 'naadam' is lifeless and fails to evoke any emotion in the player as well as the listener. The tone of a veena is enhanced only when it is used. How does it happen? As we all know the bridge is the tone-determining part of the veena. It is located on the kudam-(see diagram).The process is like this:-
Veena is subject to acupressure simultaneously while the player is involved in producing music through the instrument. Acupressure is an ancient art using the fingers (or other parts of the body which is irrelevant in the case of veena)to skilfully press key points, which stimulates the body's (in this case -veena) natural abilities. When these trigger points (frets and strings) are pressed, they release muscular tension (tonal inertia) and promote blood circulation ('naadam'-resonance).
The index finger and the middle finger of the left hand press on the metal frets as they move from one swara to another. The right hand's index and middle fingers strike (pluck) the strings firmly, matching the movements of the left hand. As both the hands operate simultaneously,the strings that runs across the bridge rub tightly across the brass plate on top of the bridge (there are two bridges, the top of the bridge which is covered by a brass plate supports four main strings, holding them tightly and firmly while the side bridge, which is a curved brass plate supports the three side strings) creating a black line-like dent or mark over the brass plate while the metal frets, due to the pressure of the left hand fingers dip ever so finely into the wax-bed. Both, the line-like mark on the brass plated bridge and the frets that are being pressed and ground by the act of playing the instrument gradually bring about a deep timbre in the tonal quality of the veena. Obviously the points (swaras) wherever the frets are pressed by the left hand and plucked by the right hand fingers trigger particular zones on the brass plate resulting in tonal enhancement. If a particular krithi or raaga or the mere scale of Mayamalavagowla from open sarani to the middle shadjamam could produce tonal enhancement to a certain extent, the result would be far greater and wholesome when the veena is played or subject to acupressure from the first fret (rishabha) to the topmost shadjamam, that is, on all the 24 frets.
The two ragas, Mayamalavagowla and Haimavathi when played on three octaves (starting from the open shadjamam of the third bass string to the topmost shadjamam on the first string) in all the three speeds activate every zone on the brass-plate. The 15th melakartha raga, Mayamalavagowla and the 58th mealakartha raga, Haimavathi consist of swaras that are missing in each other, thereby encompassing the 24 frets of the veena, leaving no scope for an untouched pressure-point.
at July 09, 2010

Very interesting! We always hear the effect of ragas on listeners, but I never thought of how they would affect the instrument itself.
Gayathri garu, could also please touch upon the subject of gamakas - their purpose/significance etc. ? Since gamakas is one of the unique features of carnatic music (many say there are no gamakas in Hindustani music, but I do hear jaru gamakas in Hindustani), theremust be something very special about them.
Thank you for your wonderful articles.
Music Lover

"The two ragas, Mayamalavagowla and Haimavathi when played on three octaves (starting from the open shadjamam of the third bass string to the topmost shadjamam on the first string) in all the three speeds activate every zone on the brass-plate."

Would that hold good for any other raga pairs that have the opposite swaras in them - e.g. Todi-Kalyani, Chakravakam-Simhendramadhyamam etc.?

Dear Music Lover,
I will write about gamakas after I gather much more info on that.I do not know about Hindusthani gamakas, but the dasa vidha gamakas in our music are unique that give shape to our rich carnatic music. There could be a special feature attached to the jaru gamakas in Hindusthani as well.
Thank you for your kind appreciation!
About your secong comment, pl. refer to my latest posting.
Regards.