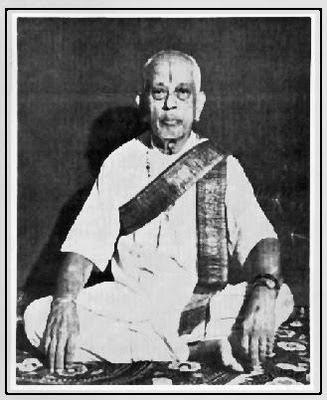 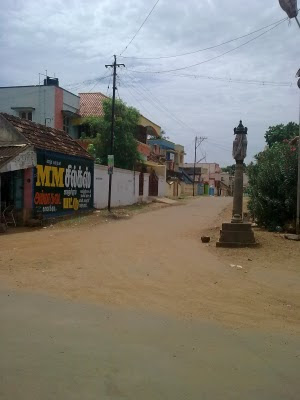 I had performed in the Vairavar Temple (Kala Bhairavan) in Vairavanpatti on Aadi Pooram (August 12th). As it is a small, remote village my mother and I had to stay in Kaaraikudi which is around 15 kms from Vairavanpatti.That day being Andal Jayanthi, in the morning my mother and I went to Ariyakudi (5Kms from Kaaraikudi where we stayed) to Lord Venkateswara temple (famously known as "Thenn Tirupathi"). I asked the temple priest to give me guidelines to go to Sri Ariyakudi Ramanuja Iyengar's house. I was eager to see where the Monarch lived. Saying "Vaango" the temple pujari walked with me all the way outside the temple and pointing towards the opposite street he told me, "Ado avaaloda veedu inda theruvule daan irukku!"
Awestruck,I stared at the street. From there I clicked with my mobile.
at August 16, 2010

Very lovely posting, touching and sincere. Seeing the street made me feel somehow humbled. Ariyakudi Ramanuja Iyengar indeed is the Monarch of Karnataka Sangeetham. Thank you for the post

What a legend Ariyakudi was and how well the master sang! His two greatest strengths were his consistency and his sense of proportion (alavu). They said his cutcheri was good even if it is not his day. His another major strength was - he always concentrated to pack more and more keethanams in his concerts because he knows for sure that the audience primarily wants to listen to keerthanams only. The cutcheri format which all the musicians follow today was originally laid down by Iyengarvaal.

Late Sri Semmangudi Srinivas Iyer says, "Learn from me, but sing like Ariyakudi and if I'm born again, I want to sing like Ariyakudi only." Late Smt MS, in reverence, had his photo potrayed in her home. Mridangam wizard, late Sri Palghat Mani Iyer's favorite singer was Ariyakudi and called him the best and the greatest. For more, access the link http://www.carnatica.net/ariyakudi.htm

Few months back, my father and I were heading towards Mylapore tank through a local bus (my father doesn't like coming with me in my car or my bike. He feels absolutely safe in our singaara Chennai bus :)). On the way, my father told me, "Inga thaan Iyengarval irundha." The house unfortunately is in dilapidated state.

Request you to post more on our past masters. It is an absolute pleasure to reflect back with reverence and remember the great legends of the past, who had shown the path for the modern musicians to follow.

Excellent post! Just looking at the photo of the that street gives us goose bumps. It is surely a witness to some brilliant teaching and music of that great man. He was the greatest of all time. Gayathriji,were you able to enter into the house? who lives there at present. People should have ideally converted his house into a sort of memoriam..

Sham, thank you for the appreciation!

Dear Sri.Srivatsan,Thank you for sharing your experiences and links.
Best Regards,
Gayathri

Dear Ms.Lakshmi, Thank you for liking my article on Sri Ramanuja Iyengar. Obviously somebody is living in his house, I didn't go inside the house., I have no knowledge of who is there at present.
Kind regards,
Gayathri