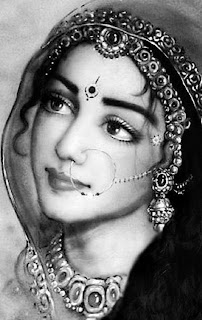 Goddess Radha's star, Jyeshta (today's star as I am posting this) means "elder" which is probably an indication of Her being many years older than Lord Krishna. Their relationship surpasses human concepts and is essentially spiritual in nature.
The "sama sapthama bhavam"in the horoscopes of Lord Krishna and Goddess Radha (Lord Krishna's star Rohini in Taurus and Goddess Radha's star Jyeshta in Scorpio forming a mutual aspect)is another indication of their supreme compatibility. ( my search for the horoscope of Goddess Radha continues for deeper insight......) A mutual aspect between boy's and girl's moons in their respective horoscopes eradicates every other disagreement under rajju, vedha, gana, rasi etc. of the charts.
Sage Durvasa, who worshipped Goddess Kamakshi (author of "Sowbhagya Chinthamani Kalpa" a divine text about the worship of Goddess Kamakshi) is believed to have presented a boon to Goddess Radha.
On a Dwadasi thithi while Radha was playing with her friends, the Gopis, Sage Durvasa arrived at the palace of Radha's father, King Vrishabhanu. All the gopis ran away at the sight of the angry sage, but Radha remained. Durvasa muni was immensely pleased to see the incomparable beauty of Radha and asked her to feed him sweet rice prepared with her own hands.
Radha immediately ran to Her mother to collect the ingredients: nicely scented rice, milk, sugar, raisins, almonds, cashew nuts, elaichi, camphor etc.
The sweet rice Radha prepared out of the ingredients turned out to be inconceivably sweet and delicious beyond belief. The nectarean rice Sage Durvasa ate while Radha served convinced him that Radha was none other than Goloka Mahalakshmi, no one else could have made such a wondrous preparation that defeated the taste of nectar and caused him to experience ecstasy.
Sage Durvasa, pleased with Her service and out of affection for Her announced,"I am offering You a boon that whatever Your hands touch, whatever You prepare, will taste better than nectar. Whoever tastes this food cooked by You will have long life, strength, beauty and fame, all of which will increase day by day!"
On hearing about Sage Durvasa's boon, Lord Krishna's mother Yashoda Devi requested Radha to cook for Lord Krishna so that He would benefit from Sage Durvasa's boon.
Goddess Radha went to their house to cook for Lord Krishna and His mother, Yashoda Devi so that She would have so many chances to see and meet with Lord Krishna!
at May 26, 2013

kaameshwarapraaNanaathaa- ambaa is the protector of Kameshwara's life as stated in Trishati. This is very much applicable to Godess Radha. Thanks for bring out this aspect to benefit many of us.