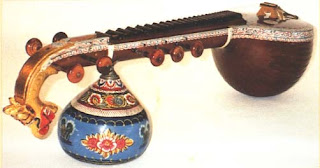 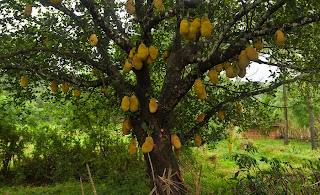 When a veena is made out of a  jackfruit tree which is situated around a graveyard or any area with negative vibes, or close to decaying shrubs, contaminated ponds etc.  it will certainly cause bad results in its player. The health of the player would deteriorate resulting in a pale countenance, weakness in limbs, or the player could encounter even worse health problems.
While the player could become famous and prosperous by playing the correct veena (made of good, seasoned wood) he/she would encounter problems by playing the wrong veena (made of bad unseasoned wood). Many a time veenas are made out of venteak or wood essentially used to make furniture (second or third quality teak or rosewood).
For a player to be influenced by the veena he or she is handling, it takes long hours of dedicated and involved practice in an erect posture ( with an erect spinal chord) and breath retention. The practitioner's mere employment of hands to play the veena fails to tap the divine potency of the vedic instrument.
Making of this divine instrument or seasoning its wood on auspicious days or thithis such as pournami, dashami, ekadashi, dwadashi, pradosham, panchami, sapthami and on days when constellations belonging to Devaganas are spiritually significant for invoking the divinity of the instrument.
A veena made out of all the good things as mentioned above is pristine pure and a practitioner who plays such a veena is matchless in his/her worldly and spiritual possessions.

Gayathri garu, I am a great fan of yours, my mother was too. My mother wanted me to grow up to be like you in terms of Veena. I learnt Veena from a young age and due to various reasons had discontinued in between. Due to a divine intervention and advice , I have started playing again from yesterday. I was reading about the Veena's wood types etc. Is there something I should do to get back the divine grace of my Veena? I chanted and prayed to Veena. I plan to pratice everyday hereafter. I am not sure what wood type it is though but it is one single wood with no joints. Please let me know if there is any kshamapama ritual or some thing i can do for winning back my Veena's grace and play again. Also let me know if we can remove the doshas if any of the Veena not being played for so many years.

Hello Madam, which house and planet/s in a horoscope signify veena learning/playing attributes?

For Utkal University of Culture, Bhubaneswar, Tamil Nadu Government sanctioned an amount for teaching Tamil.
This UUC is teaching Odessi dance and Music. If our Madam visit this University, she can absorb many things.
Before planning a visit, take a look at
uuc.ac.in.