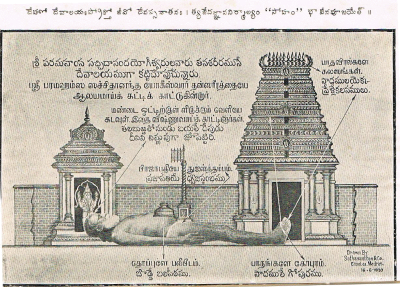 As told by the yogi:- " I was curious to know what was inside the mosque. I entered the mosque to find out. The mosque led the way into a huge basin of water where devout muslims used to cleanse their face, hands and feet in preparation for "Namaaz"( Islamic prayers). I found out that first there used to be a Shiva Lingam in the middle of the make-shift lake and rightfully in front of the Nandi. After making enquiries as to why the Lingam had to be shifted behind the rear of the Nandi, I came to know that a Moghul Empeor named Aurangazeb had demolished the original Sri.Kasi Visweswara Temple and had built a mosque in that place for his people. Ofcourse, as you all know, these events have been widely mentioned in children's books on Indian history. Let me also tell you my observations!
The event of Aurangazeb's act of demolishing of our sacred Sri. Kasi Visweswara Temple has been mentioned in "The Brief History Of India".
During the regime of Aurangazeb, his fanatic tendencies were well-known among the general public. In 1677-A.D., exactly 253 years ago ( before the time of the publication of Sri.Paramahamasa Sachchidananda Yogeeswarar's "Shareeradevaalaya Rahasya Paarijaathamu" in 1930), demonstrating his love for his beloved muslim citizens, Aurangazeb destroyed Sri.Kasi Visweswara Temple and built in its place a great mosque for all the devout muslims to perform Namaaz.The Shiva Lingam used to be exactly in the middle of the lake of water created for the religious muslims to wash their face, hands and feet for Namaaz."
(To be continued....)
at August 24, 2019

Hi GayathriJi,
Your blog is the first thing I look up to, every morning:-) Sometimes I feel cheated when there are no new posts for a long time:-) Thanks for such an informative blog.
I wanted to post my opinioun on this particular post of yours.. Ofcourse the credibility of the information in your blog is unquestionable.. and I know that for a person adept in 'Veena Yoga', there would hardly be any place for unwanted criticism or any accusations on anybody..
But pardon me, I feel articles such as these might lead to an unrest about Muslim community in general... some painful truths are better left unsaid... as Maha Periyava put it, 'Na Bruyath Satyam Apriyam' (Deivathhin Kural)...
Again, I must reiterate that this is my personal opinioun about this post.. I wholly appreciate and accept each and every blog post of yours...
Have a great day... and please accept my sincere apologies if my comment displeases you in any way...