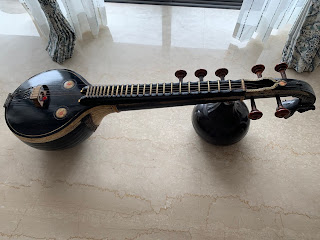 'KALI', the name of my first acoustic Saraswathi Veena on which I have played for many thousands of hours (from the 60s).

This is an era of Electric "Veenas". My articles on hard work and rigorous practice which are applicable only to acoustic Veenas may appear strange and seem like brouhaha over nothing in a scenario where the fast and flirtatious Electric "Veenas" are made easily approachable and manageable.

Labour and penance on Veena are required only in the case of acoustic Veenas in order to bring out the true resonance of their wood properties that are responsible for producing the true tone of Veena, celebrated as "Veena Nadham".

In the absence of Veena's acoustic features the tattva (nature) of the artist neither connects itself to the Veena nor is it duly projected by the instrument. Therefore all the Electric "Veenas" (due to usage of magnetic mikes) have a uniform tone of an alien combination of guitar-gottuvadhyam-sitar.

The tone of an Electric "Veena" (passing off under the name of Saraswathi Veena), is entirely controlled and managed by the mike system (sans the acoustic features of Veena) lending an artificial razzle-dazzle comparable to the glitter of imitation jewellery (the true tone of acoustic Veena being the 24 carat gold).

These "Veenas" are also designed to facilitate any speed and comes in all shapes and sizes, including the normal size. They are not only travel friendly, these "Veenas" do not require the hard work an acoustic Veena demands. Electric "Veenas" are quite easy to handle with the mike (instead of the player) taking all the burden of glamourizing the tonal output.

While the field of music and social media are flooded by Electric "Veenas" played by all and sundry, only a handful are acoustic Veena loyalists. Out of the Electric "Veena" players only a few stand out, and that too only for their "bani" (style of school) and "vidwat" (musicianship). Therefore the responsibility of identifying a real Saraswathi Veena lands on the music lover or aspirant.