THE SECRET OF VEENA- 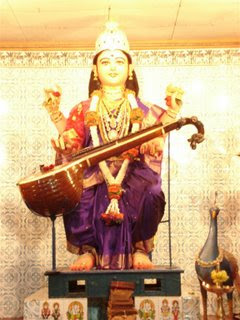 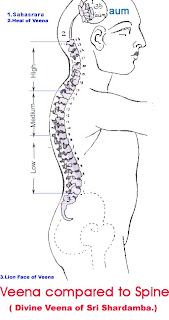 
The spinal chord extends from down the pelvis right upto the brain,sustaining the backbones.This is like the trunk of the veena.Just as there are 24 divisions in the veena,there exists similar assortment of 24 vertebrae in the spinal chord.The 24 vertebrae of the column are grouped as under by the scientists of the west in their treatises on anatomy.


Thus totalling 7 joints(cervical belonging to the neck,dorsal belonging to the back and lumbar belonging to the loins).In the veena we see the mansions are large and roomy as they begin from the lower pitch. But as we proceed to the top pitch the frets shrink in size till towards the very end where they are rather minute.The division found near the lion-face(foot) are larger than those near the brain. Similarly,the vertebrae in the column are large and thick near the region of the waist,dwindling more and more in size and thickness as they approach the head.In vedas,the spinal chord is described as veenadanda. As already stated the lower end of the veena is termed as simha-mukha or lion-face.Even the lower end or basal stand of the vertebrae is shaped like veena's simha-mukha.


Physiology tells that the cerebral chord or naadi runs inside the thin hollow tube embedded in the centre of the vertebral column.This cerebral chord is gross.This is not the 'Brahmarandra naadi' or the subtle super physical nerve.The mystic nerve exists as pure ethereal power in this gross cerebral chord.The sukshma nerve is beyond our ken.No x-ray or any other mechanical device can ever hope to discover this ethereal chord in the gross cerebral tendril. Man can only perceive the movements or excitation of the body,but never the forces which cause the movement or excitation.


If inside the gross body we did not possess an ethereal non-physical double, our bodies are but dead.Therefore,inside our corporeal frames there do exist nerves embodying psychic power such as the 'sushumna' or the 'brahmarandra naadi',surya-chandra naadis known as the ida-pingala naadis or the right and left sympathetic chords,the six psychic lotuses known as 'shat chakras' all these enshrining deep occult currents.


In the mysteries concerning the presence of Omkara in the sushumna naadi, one can perceive the deep esoteric varieties that vitalize the veena held in the hands of Goddess Sharada Devi.The power of the manifest (aahatha) sound,issuing as sweet music from the strings of the veena on which we play, reside in the gross nerve fabrics enveloping the mystic sushumna chord.This means that the power of psychic music which brings out the earthly music, resides in the unseen sushumna veena, while the power of the earthly veena resides in and vitalizes the peripheral nervous fibres around the sushumna.Between these two veenas rises the wall of the cerebral spinal chord of utmost fineness which envelops the sushumna naadi even as a glass chimney divides the light of a wick from its atmospheric surroundings.

The timbre of the veena strings has for their prototype the sound of the vedas interfused in the undefined,unmanifest anaahatha or omkara vibration.The seven swaras are rooted in the Cardinal psychic centres of the sushumna naadi viz Mooladhara,Swadhishtana,Manipura,Anaahatha,Vishuddha,Aagna,Sahasraara .Even though the seven swaras have each of their particular habitats yet in manifestation they interact with one another and reign collectively over the whole sushumna region as the power of the Primal Omkara."(click on photo to enlarge). Courtesy- Yedathore Subbaraya Sharma
at June 24, 2009

Gayathri ji,
With your understanding of all such details about the veena structure and its implications, no wonder your playing of the veena sounds so divine and unique. The nadam of a Veena itself has something special about it. The reason must be all that that you described in your post.
One thing I did not understand is how a "player handles the veena through the sheer power and force of his 'Prana' or 'kundalini shakti' ". How would one do that? Is this equivalent to 'nabhi' singing in vocal music?
Your posts are so educative and inspiring, especially on the spiritual dimension of CM (carnatic music).
Looking forward to reading more and more.
Thank you for taking time to share your insights.
Music Lover

Thank you for your kind compliments about my playing,it is God's grace and nothing special about me.
About the player handling veena through force of his kundalini shakti,it is akin to 'nabhi' singing as in vocal music.Though we don't sing outwardly,the inner voice operates with the effort to bring out bhava(expression).The kundalini shakti is tapped at a very advanced level of such a process.It is my pleasure to gather more information to share with you.Thank you.Gayathri

That was excellent mam,I am really admiring your ability your proficiency. To my knowldege i do not find any one who have thought and compared the music in veena to the spinal cord or to the Gayatri Mantra, It is the power of your name and the intellectual mind thinking. The article of yours reveal that your breath, mind, heart, brain, blood, vein all has veena in it... I wish and pray that i should get an oppurtunity to learn under you. with love malathi

Dear Ms.Malathi,
It is not my discovery,but I have learnt from authentic information,for instance from books of Sri Abraham Pandithar etc. about similarity of veena and human spine.
It is God's grace tha I can play veena.God willing,it would be a great pleasure to be able to teach you.Love,Gayathri

Is their any particular age to learn Veena

Any age from 5 years is suitable.