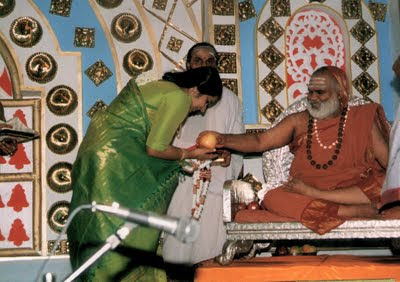 When the Sringeri Jagathguru gave me the title of "Asthana Vidushi" of Sringeri Mutt in the year 2003, my joy knew no bounds! Sringeri and Sarada Kshetram are close to my heart. I feel there is a special sanctity attached to Sringeri Mutt and all the branches of Sringeri Mutt, wherever they are in India. The temples are maintained extremely well and there is immense dignity and discipline in the way the temple priests conduct the poojas in the temple.
His Holiness, Sri Bharathi Theertha Swamiji was born in Narasaraopet, Andhra Pradesh in 1951. As I am already attached to Sri Vidyaranya Swami's ashram in Narasaropet, I was overjoyed to learn that His Holiness, Sri Bharathi Theertha Swamiji also hailed from the same place!
The Jagadguru's Guru, Sri Sri Abhinava Vidyatheertha Mahaswamiji in His interview with Sri R.M.Umesh (in the book titled "Yoga, Enlightenment and Perfection") has described the ascent of 'kundalini' in detail.
Paramacharya of Sringeri states that one morning He sat in 'siddhasana' and did four pranayamas with 'jalandhara', 'uddiyaana', and 'moola-bandhas'. He began His meditation by directing His gaze to the middle of His eyebrows while mentally chanting "OM". Gradually a blue hue had manifested and He could not see any particular form. Suddenly He felt an electric shock at the middle of His soles. He felt intense heat and His body jerked sharply as the sensation moved upwards. His breathing stopped abruptly as the sensation continued to travel upwards and into His head. At that moment, He went deep into "savikalpa-samadhi".
The Acharya lost all sensation of His feet and legs and the lower portion of His body.The movement of the heat from the soles of His feet to His back had been swift and sudden, but from the base of His back to a little below the navel, the ascent was slower at the same time swift. From the navel to upwards, the heat moved with the speed of an ant.
The Acharya declared that when the heat reached the base of His back, He was able to momentarily view the lotus of the Mooladhara Chakra in full bloom. after that, He had a brief view of the Swadhishtana Chakra. As the sensation ascended His back to the level of His navel, He could clearly have a glimpse of the lotus of the manipooraka chakra facing downwards, with the petals fully closed. When the senstaion touched the chakra, the lotus instantly blossomed. The same pattern was repeated when the sensation reached the levels of Anahatha, Vishuddhi and Agna Chakras.
After the Acharya had briefly witnessed the Agna Chakra in full bloom, He experienced a bright flash of light like that of a lightning. Next He witnessed a beautiful, luminous, tiny blue orb. His attention became glued to this tiny blue orb and gradually its smallness became inapparent. Thereafter the Acharya apprehended the forms of Shiva and Parvathi within the blue orb. Acharya describes that moment as His "savikalpa-samadhi".
at November 18, 2009

Nice posting. Do you know about these kundalini books/

Thank you, theis particular book will be available in Sringeri Math or any spiritual books shop, even other kundalini related booka are available in general book shops.

Dear Mrs. Gayathri,
Considering you practice Veena like a yoga, have you had any experience yourself?
Jayasri

I want to rephrase my question, do you have any spiritual experiences that you can share with us? While listening to music we feel we are taken to a different plane. I always wondered how would you feel, immersed in music all through your life.
Regards,
Jayasri

Dear Mrs. Jayasri, I saw your other comments too. Thank you for all the three comment. Playing the veena by itself is a spiritual experienc! Apart from this, I will think of the other expriences and I shall post them in my blog after 2 or 3 weeks.
Thank you for you kind support,
Regards,Gayathri

Dear Mrs Gayathri
I chanced upon these pages courtesy google by serendipity. I read about the experiences of your teacher who heard the nada of the veena in the aircraft. It would be inspiring to the rest of us if you can post any of your spiritual experiences. As Mrs. Jayasri said the musicians with their practice of nada yoga are on a different plance and reach the almighty more easily
Regards
Hari

Dear Sri. Hari,
Thank you very much! Certainly it would be my pleasure to share my experiences in my blog and I will do that very soon. I too agree with Mrs. Jayashri about nada yoga.
Regards,
Gayathri

Dear Mam, you hv rightly mentioned the way Sringeri math maintain a temple and the priests are fully dedicated...Pls do visit the Siddhi Vinayak Temple maintained by Sringeri Math at Secunderabad...
It's really a great honour to receive an award from Sringeri swamiji...May the Almighty bless you with all good things in Life... Regards, Kumar.

Dear Sri. T.L.Kumaaramurthi,
Thank you for your kind appreciation of my article. I shall definitely visit the Sidhi Vinayak temple as recommended by you.
Kind regards!