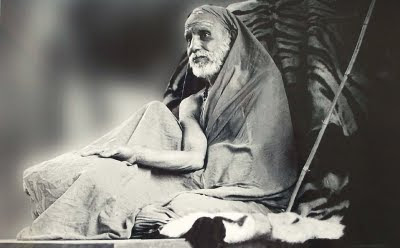 I have a book in telugu titled, "Nadichey Demudu" authored by Sri. Neelamraju Seshaiah. This book is a compilation of the experiences of many devotees (from Andhra Pradesh ) of Kanchi Maha Periyavaa, concerning His Holiness. Every essay is a moving account of feelings, devotion and experiences of the bhakthaas of Maha Periyavaa, I had read this book atleast twice.


The most touching version came from a devotee called Sri Kalloori Venkata Subrahmanya Dikshithulu. His experience strengthened my belief about 'bhakthi'. People usually misinterpret 'bhakthi' as overwhelming respect/fear, to the extent of distancing oneself from the deity instead of approaching and attaining the deity. I had always felt that 'bhakthi' meant overwhelming love aimed towards spiritual proximity packaged with intensity of passion and longing, same as the lovelorn sentiments expressed by Sri Thyagarja ('Nannu vidachi kadalakura'-Rithigowla, towards Lord Rama, ...'Ika thalanu nenu', Devibrova, Chinthamani by Sri Syama Sasthri towards Goddess Kamakshi, and innumerable other compositions of theirs in other ragas and compositons of various other saint composers, Azhwars and Nayanmars.)


I had read the article of Sri Kalloori Venkata Subrahmanya Deekshithulu many number of times as I found the dialogue in sanskrit between Maha Periyavaa and Sri Deekshithulu spiritually stimulating and emotionally fulfilling. The conversation between Maha Periyavaa and Sri. Deekshithulu in sanskrit left a deep impact in my heart. Here is a translation of the same from telugu to english in first person as narrated by Sri Kalloori Subrahmanya Deekshithulu:-
SANNIDHAANA BHAAGYAM
Srivaru ( devotees from Andhra address Maha Periyavaa as "Srivaru") was touring in Tamilnadu.I usually try to be in His divine presence( His 'Sannidhi' )during summer holidays. One evening, in a remote village in Tamilnadu, Srivaru commenced His discourse:-
" Birth and death are natural phenomena in human life. Manmatha is the cause of birth and Yama is the cause of death. If not for the misery caused by these two, there would be no birth or death. To avoid rebirth, we need to appeal to the One who had controlled Manmatha. To eradicate death, we need to propitiate to the One who had punished Yama. Both these jobs were done by only One Supreme being, who is none other than the Smarahara and Mrithyunjaya, Lord Shiva! Lord Srikantha (Maha Vishnu) is not easy to attain, whereas, Lord Shiva is very easy to please and attain. Let us all surrender to Lord Shiva,'Namah Parvathipathaye Harahara Mahadeva!"
I joined the chorus of voices. Srivaru then went on to another episode.
After the discourse Srivaru rested on the terrace of a small house in the village. The person who was appointed to attend on Srivaru was reclining on the steps. It was past midnight and I was unable to sleep. I sat downstairs on the 'arugu' ( a small cement slab in the frontyard of the house),pining for the Darshan of Srivaru. I mustered up some courage and decided to go upstairs. The man in attendance stopped me,"Periyavaa is taking rest, don't go upstairs." Feeling dejected, I went back downstairs to resume my earlier position. I tried to find solace in reading about the sentiments of the Gopikas towards Lord Krishna and the poetry of Sri Pothana. My mind refused to feel settled and I abruptly got up to go upstairs. I found the man in attendance half asleep. Without waiting for a second thought, I quickly jumped up the stairs towards the terrace.
I found Srivaru resting on His side, using His hand as a pillow. Without disturbing Him, I tiptoed to a distant corner, watching Him.
"Kaha?" (Who?) Srivaru asked me in sanskrit.
"It is me, Kalloori."
Srivaru asked immediately, "Nidraa Naayaathaa Kim? Naidaaghasthopo Baadhatheyvaa?" (Are you unable to sleep because of the heat?)
"Na Naidaaghasthaapaha (it is not because of the heat). From morning onwards I was trying to get atleast 5 minutes of time in your "sannidhi", I was pining to be with You! I want atleast five minutes of "Ekaantha Seva" (private darshan) in the presence of Your Holiness, You have to give me that." my voice was tremulous.
"Thvayi Gopikaathva Mathi Dishya Mayi Krishnathvam Sambhaavya Kimapi Sambhaavitham Khalu-"(Are you attributing Gopika tattvam [nature of Gopikas] to yourself and Krishna tattvam [nature of Lord Krishna] to me and imagining further?)
I wondered how He had guessed! I could not bring myself to reply.
Srivaru continued, "Adya Asmaabhi sthamila Bhaashaayaam Prasangaha Kruthaha Thvam Bhaashaanabhignyaha Kim Jaanaasi Maduktham" (We were conversing in Tamil, were you able to understand?)
I replied,"Srivaru ordained that I should understand, that is why I could understand." I had been travelling extensively in Tamilnadu for the sake of Srivaru, yet I could never understand the native language. Most surprisingly, I could follow the discourse of Srivaru on that day, as per His 'sankalpam'(His wish).Srivaru asked me to tell Him what I inferred from His discourse. I narrated the essence of His discourse in the form of a small sloka:-
"Janimrithi Virathirbhavedithithvaam Rathipathi Shaashakameesha Kaalakaalam
Himagiri Thanayaa Dvitheeya Meedey Parama Dayaarasa Meesha Madvitheeyam."
Translation:-"Manmatha is the cause of birth, Yama is cause of death. The Supreme Lord who had supressed both of them is Kamavairi Mruthyunjaya, Chandrasekhara, Lord Shiva. He presented half of His body to the daughter of Himalayas, He is merciful and compassionate. To defeat birth and death, we should surrender to Him!"
Srivaru listened with a smile. His smile felt like moonlight.
"You asked me for 5 minutes of my private time, how many minutes have passed?" Srivaru asked.
"Maybe 15 minutes have passed..."I replied.
I felt remorseful and guilty for disturbing His rest, I said,"I am unable to bear the sight of Srivaru resting on this hard floor."
He immediately replied,"Kim Nashrutham?"( have you not heard?)
'Kshithithala Shayanam Tharuthalavaasaha
Karathalabhikshaa, Kowpeenavanthaha Khalubhaagyavanthaha!"
(The most prosperous are the ones who wear nothing other than a loin cloth. Sleeping on hard floors, living under trees, food in the palm of the hand - who can be more prosperous than this? A materialist can never be so prosperous!)
He consoled me and sent me back.
at November 13, 2009

very nice message. Realising the true nature of 'Bhakti' itself needs a lifelong devotion and sadhana....

Thanks for sharing and regards

Dear Madame,
That was a nice article...please do write more...
with love
mala

Today I was reading an article about Madurai Mani Iyer (MMI) and Shri Periyava. I wanted to share this article with you but when I opened your blog I was really shocked that you also had written about Maha Periyava at the same time.

Here is the brief article on MMI and Maha Periyava. It moved me to tears to learn about the karuNyam (compassion) of Maha Periyava. He is the manifestation of compassion:

Mani Iyer was a great devotee of Maha Periyava. Periyava treated Mani like his own child. Mani saw Periyava as Sri Kapaleeswarar, Sri Parameswara himself in human form.

Immediately Sri Mahaswamigal intervened and told Mani Iyer that it was he who accompanied him with a peel of orange in his hand like kanjira. ("Naan thaan appaa thaaLam pOttEn!") Suddenly Mani Iyer broke down with tears and cried "appanE kapAleeswarA, paramEswarA, 'en' periyavALA thALam pOttathu?" beating his chins, he cried and told "en periyavALai pAkka mudiyalaiyE, engE irukkA". PeriyavAL in his voice filled with kAruNyam replied "ithO un pakkaththilEyE irukkEnappA". Mani Iyer repeated told "appanE kapAleeswarA, paramEswarA" and prostated. PeriyavAl blessed him with his benign smile like a mother to her child.

The above incident was narrated by Sri Bharaneetharan (of Ananda Vikatan) in his "anbE aruLE" book on Sri Mahaswamigal.

Dear Mrs. Jayasri, Even I have heard that Maha Periyava had great affection for Sri Madurai Mani Iyer. The incident which you have shared here is so absorbing and heart warming! Thank you very much for sharing the same with me,
Best wishes and regards,
Gayathri

The bhakthi bhavam presented in the article is very powerful. Thanks for sharing.
Jayasri

Dear Ms. Jayasri, Thank you for your compliments, it is my pleasure to share.
Gayathri

Just to read / hear about Sri Maha Periyava itself is such a divine feeling. This narration in first person experience is really moving and reestablishes our faith in Sanadana Dharma by HIS own blessings and through Your Blog. Please keep more of them coming.

You may also be aware that there is one blog about Revered JagatGuru Sri Mahaperiyava.
http://mahaperiyavaa.wordpress.com/.

I had the wonderful opportunity to listen to some of your divine concerts in Chennai.

Dear Sri.Krishna,
I thank you for giving me the link to info on Maha Periyava.
I am blessed to share whatever little I know .Thank you for the apprecaition of my music and articles.
Best wishes and regards,
Gayathri

Its really great to share anyone's experience with Periyava and it is divine. Appreciate for having spared your time in sharing your blissful thoughts...God Bless!

Ms.Banoo, My pleasure, thank you!