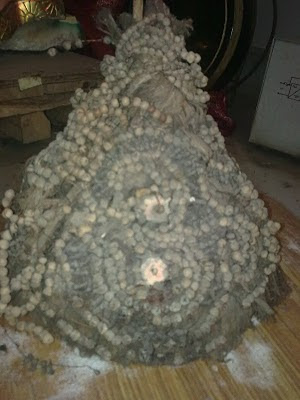 Above is a crown made of Tulasi beads, cardamom and 'lavangam' strewn around and shaped as "OM" (in sanskrit) on it. This is the crown which His Holiness, Pujyasri Sri Sri Chandrasekharendra Saraswathi asked me to wear on my head while I performed in His Divine Presence (in Orikkai village, while He was observing Silence) when I was 11 years old.
Kumudam Bhakti magazine (Issue:-April 16-30,2010) carried my photographs and interview. The interview though well presented had a few gaping holes (obviously due to a communication gap) which I thought I would fill up here.
The interview states that I had been to the Ashram of Paramahamsa Yogananda in Encinitas and I also had His darshan!!!! He had attained liberation in the year 1952,even before I was born!
The article also states that I do not go abroad due to my belief that Hindu Dharma is opposed to flying overseas. This statement is partially true. There was a long period of time (through the best part of the 80s and all through the 90s) when I had simply refused to go abroad as I firmly believed that my living God, Paramacharya was against Hindus crossing the high seas. In the bargain I had even rejected plum offers from abroad inviting me to perform veena. In the latter half of 80s to the best part of 90s, I was frequenting Kanchipuram, involving myself (for a brief period during mid-90s) in the fund raising of the temple that is being constructed for Paramacharya in Orikkai village, near Kanchipuram. In the bargain I had the great fortune of meeting and interacting with renowned vedic scholars and close associates of Paramacharya. In all our conversations, the one thing that struck a chord in me was His objection to Hindus crossing the mighty Oceans. I wondered whether the rule (not to go abroad) applied only to vedic pundits and sanyasis. I even knew of a few staunch devotees who not only travelled abroad frequently, but also raised funds abroad towards the construction of Paramacharya's temple. I was genuinely confused and no matter how much I discussed about this, I could never get a clear and concrete answer whether women and artistes could go abroad. After much introspection, I decided not to accept concerts abroad. My trips to Muscat in early 90s and Berlin, Germany in 2002 for unavoidable reasons were the only exceptions. I had rejected many offers all through till last year, when the mother got the better of the aritste in me.
2009 was the year I rushed to San Diego to be with my daughter, Haritha who works for Qualcomm.
In my interview I had mentioned all about the dreams I had while in San Diego. From day one in San Diego, I had dreamt of saints and great sages. The prophetic dream about Paramahamsa Yogananda got me trailing the path to His ashram in Encinitas (a half-an-hour's drive from San Diego).
I had semi-visions of Sri Vidyaranya Swami while in San Diego and Houston. I was taken aback that all these divine things were happening to me in the US!!!! While I was posting articles on Soundarya Lahari (mantras,yantras and text) in my blog, 'Jasmine Strings' while in San Diego, I had curious dreams of 'Kundalini' rising like a serpent!
The ultimate dawning (that I was all along wrong in believing that Paramacharya was opposed to Hindus going abroad) ascended on me in the form of a prophetic dream!
In my dream, Paramacharya, in His saffrons,smiled gently as He beckoned to me. I was pushing back my two plaits and more keen to play in the sand (which means I was a child of 6 or 7 when I used to wear two braids and loved to play in the sand!) I slowly walked towards Him and He smilingly made me sit on His lap. He started chanting a famous and most powerful mantra and asked me to repeat it. I repeated it and word by word He made me repeat the entire mantra. In between, when I mispronounced a verse, He smiled and asked me "Idu yaaru solluvaa?". I corrected myself and repeated the whole mantra to His satisfaction. I asked Him in english,"how many times should I say this everyday?" He smiled widely as though to a child and told me the number, allowing me to run towards the sand.
When I woke up the next day, I understood the implication of Paramacharya appearing in my dreams while in San Diego. His appearance in my dream not only reaffirmed the fact that He was "Sarvaantharyaami" (Omnipresent), He also let me know through the dream that He was not against Hindus travelling anywhere under the sun! He actually sought His child (myself) in the US to preach me the mantra! I also realized that while I was in India I had never had such powerfully divine dreams almost everyday! From the next day of my dream till today, I recite the mantra everyday as instructed and guided by Paramacharya in my dreams in San Diego.
The Kumudam Bhakti interview mentions my dream without mentioning the crux, that Paramacharya IS NOT opposed to Hindus crossing the oceans to go abroad.
at April 24, 2010

Very interesting, Gayathri garu...particulary the mantropadesam you had in your dream. Hope we get to listen to you perform in the US next time!
Music Lover

Was really surprised to see this message in your blog, first thing today morning..
I had read your article yesterday, and was curious to know certain things about the same..
Firstly, there is an idol of Paramacharya in your puja room (based on the photo that accompanied the article) where he is standing with this 'dandam'. Where did you get this from? I would really like to buy one for myself.
Secondly, there is a mention about a 'chair' for Paramacharya.. I'm really curious to know more about the same..
Hoping to hear more from you..

Dear Music Lover,
Thank you very much. I had earlier performed in the US in the year 1985. It would be my pleasure to perform for you again, God willing!
Regards,
Gayathri

Dear Mrs.Mythili,
The idol is given to me by vocal vidushi Smt.Gayathri Venkataraghavan.
About the chair, the details are all mentioned in my interview in Kumudam Bhakthi. The chair was one of my drawing room furniture which I shifted to the pooja room because I often dreamt of Paramacharya seated in the same.
Regards,
Gyathri

You have deserved this such a rarest of blessings from JagatGuru Sri Paramacharya through HIS mantropadesam.

This post also clarified that "Paramacharya IS NOT opposed to Hindus crossing the oceans to go abroad ". Thanks a lot, it is like Provider giving clarifications to pilgrim by dispelling
doubts. I hope many others will find this point and other messages in this post which are relevant to them through GOD's own messages.

Dear Sri.Krishna,
I am very happy that you have liked the post and found it beneficial.
Sri Mahaperiyava is living God!

Hi VGJi,
Thought of sharing this link with you:- http://www.vedarahasya.net/namonama.htm

Anyone who reads this will be moved to tears on learning about Maha Periyava's utter humility.

Dear Mrs. Mythili,
Thank you for sharing the link, I will visit the site immediately.
Regards!

Really Touching. Thanks for sharing this experience.

Thank you very much, my privilege!

Yesterday Dr M.a. Bhageerathi Anantharaman (M A Bhageerathi)spoke to me about your Blog and the Blessings you have received from Maha Periyava, first thing I told her that you are a Divine Veena Player and went through your blog (still long way to go to in terms of reading everything) but the moment I read this article I got choked, what a gift you have received from Maha Periyava. I have posted couple articles about Maha Periyava in a face book Group called "Sage of Kanchi" and Maha Periyava" and just cannot imagine the response and read for yourself (Chandrika Shankar How fortunate is she,herself embodiment of Saraswathi?.Being blessed by Paramashiva Himself in the form of Mahaperiyava needs generations of tapas.)Must thank Dr M A. Bhageerathi once again for this. God Bless You

Thank you BS for spreading the message about Madam's blog. Indeed we all are happy to read about our dearest Mahaperiyava. I pray to him to be with me always. Shri Mahaperiyva thiruvadigale sharanam

Thanks to the Sage of Kanchi group, i got to read this post. My obeisance to a blessed soul !

Idi yaaru solluva -- may also be interpreted as Maha Periyava initiating you into Sri Ramana maharshi 's maha yoga of who am I ? Naan yaar ?[ self enquiry , athma vichara Jnana maarga ] 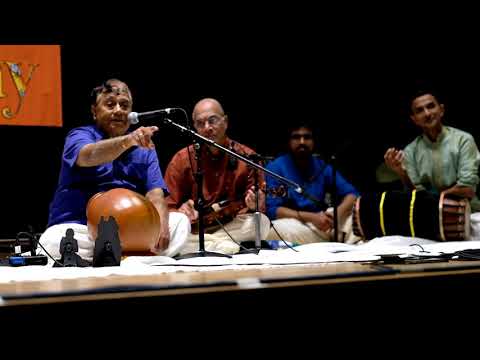