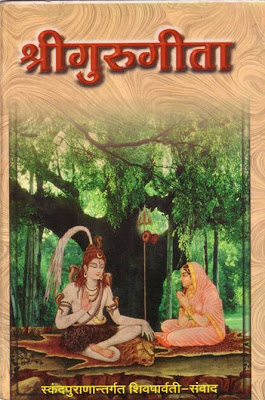 Very happy to note about श्रीगुरुगीता. Previously heard about Ashtavakra Gita, Rama Gita and of course the Holy Bhagvad Gita.

The fact that Sage Vyasa who authored Bhagvad Gita in Mahabaratham has authored श्रीगुरुगीता in Skaanda Puranam kind of gives great Joy as Siva and Vishnu teaching the Same Absolute TRUTH.

Thanks for sharing this and happy to read the valuable comments by other's in this thread as well.
Trust you are doing well.

I thank you for sharing these precious gems from the Sri Guru Geeta.

I have seen many false versions online, mere stones, claiming to be the golden verses from the Sri Guru Gita.

I have two humble requests:

1. Would you kindly post the entire 315 verses authored by Sage Vyasa, both text and English translation?

Namasthe,
I shall do my best. Pl. keep a watch on this column, I will come back with the chapter number.
Regards.

Can I know where i will get the Guru geetha book with the covering page you have given here above... or can you post or mail me the full guru geetha matter as pdf or in some other format. My mail ID is keshava1979@gmail.com

Hi,
I am a regular listener of Guru Geeta.
I do not have English version for the same. Can you provide me the translation.

Thanks and Regards,
Chinmay Joshi