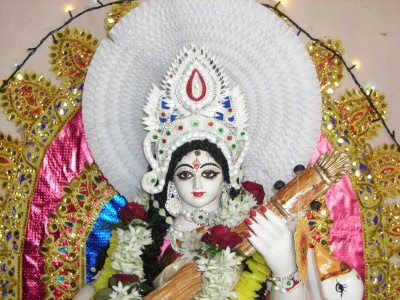 Goddess Lakshmi: Prosperity, contentment, optimism and fulfillment in every sphere of life. Prayers to this Goddess brings tremendous peace of mind and contentment. Contrary to popular belief (that this Goddess showers Her grace through cash and jewellery), Goddess Lakshmi gives great contentment that cannot be obtained even after possessing enormous wealth like vast estates, cash or jewellery. "Lakshmi Kataaksham" (Grace of Goddess Lakshmi) is visible in lustrous looks, tranquility and serenity of features, absolute contentment and a hint of a smile at all times.
(To be continued.....)
at May 20, 2011

Thank you Thank you Thank you! As I have said before, I eagerly await your "Tantra" posts. I truly feel that this kind of thing is very experiential. Hence, it's wonderful to see that someone else feels the same way as I do and effectively conveys the same in writing. Keep them coming!

Very nice Gayathri garu....once you touch on a topic, you cover it very comprehensively.
Thank you and looking forward to more :)

Thank you so much, my pleasure!
Regards,
Gayathri

Namasthe Madam,
The articles on tantra very enlightening, thank you very much for sharing this. I was wondering if you could please recommend any daily ritual or slokam for Goddess Saraswathi to seek skills in music.
Thank you again for taking the time to share this information.
Regards
Ganga