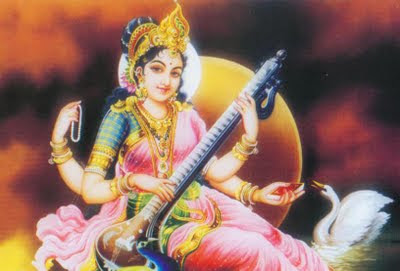 Goddess Saraswathi DeviA child sits naturally erect while playing the veena, the 'veena dandi' while the veena rests on the child's lap, comes up to his/her arm level. The child is able to run its hands across the frets of the veena without looking down and stooping, the act causing his/her spine to bend. A child between between 4-6 years of age has to reach up for the 'dandi' to be able to play the veena and a child between 6 or 7 years of age to 13 or 14 is able to handle the 'dandi' by sitting naturally erect which results in a straight spinal posture. Why is it essential to keep the spine erect while playing the veena? (Kindly refer to my earlier posts on the science of veena and meditation through veena yoga).
Adults and tall practitioners may place cushions below the 'kudam'(the dome on the right side) to raise its height to elbow level and place correspondingly more number of cushions (more number than the right side)below the 'surakkai' (the left side rest of the veena) to make the left side of the veena raise above the right side, making it look inclined. The practitioner now sits between the right and left cushions to play the veena without placing the 'surakkai' on his/her thigh. The idea is to raise the height of the veena for the comfort of the practitioner, so that he/she does not have to bend or stoop to run the hands across the frets or to pluck the strings.
Many times I thought of even sitting in "Vajrasana" (this asana is most effective in accelerating the flow of pranic energy) for playing the veena, I should try it sometime! Rudra veena is played on "Vajrasana".
Now, as the practitioner settles comfortably with a raised veena according to the length of his/her torso, he/she should now concentrate on posture.
First push back shoulders, raise the chin up and look straight ahead as you play the veena. It is absolutely necessary to sit as erect as possible for free flow of pranic energy from the muladhara to upwards. The only disadvantage in such a posture is that the player cannot look down at the frets while playing. This may cause some slips in the swaras (notes), but for an advanced practitioner it may not be difficult. It helps to practice in a dark room without the lights on. To play veena for meditation, one must play without following the movements of the left hand with one's gaze.
The practitioner need not worry about the breath patterns, the melody and purity of the music which he/she is producing becomes the breath-regulator. At a point when the practitioner is lost in the melody, suspension of breath or 'kumbhakam' which is the key factor for 'kundalini yoga'(breath retention) becomes a natural phenomenon.
To practice as stated above on an "Ekanda Veena" ( veena which is not made of separate woods and joined at the neck region but made of a single piece of wood without a joint piece at the neck region) made of pure jack fruit wood yields maximum results. The benefits are bountiful and the practitioner witnesses great changes for the better in life. The pranic force generated by such a yogic rendering of veena surpasses all the benefits derived by usage of high potency vitamins, high potency nerve related or anti-stress medication. Veena is a magical instrument if rendered as per yogic principles.

For practitioners who are unable to progress in veena for whatever reasons:-

The Eleventh chapter of Durga Sapthasathi.

"Vim" is the Bheejaakshara for veena.

Namasthe Madam,
Thank you very much for imparting knowledge on how to improve veena skills, this is very helpful. It would be great if you also please enlighten us on what offerings we could be making to Goddess Saraswathi and/or the veena while reciting these.
Thanks again for the taking the time to share this.
Regards
Ganga

Namaskaram madam,
Thankyou for sharing such a good information about how to improve veena skills.
With regards,
RENUKA

Thank you for sharing such wonderful knowledge on improving veena skills.

Thank you so much,it is really my pleasure!
Regards
Gayathri

Dear Gayathri Madam,
I am so thankful to you for sharing the knowledge regarding the posture while playing Veena (partly I read it some other post of yours) and the manthras.

Thank you for the guidance, Madam

Dear Ms.Kalyaani,
Thank you so much and my pleasure!
Kind regards,
Gayathri

Dear Gayathri Ji,
I have been an ardent fan of your music and a follower of your blog. All your posts are so valuable, informative and spiritually enhancing.
My daughters are learning violin and I would like to know if they can chant the above mentioned slogams for violin too ( though it does mention only veena).
I have noted the soundarya lahiri slogams that were specifically for instrumentalists and vocalists but would also like to know if this specific one can be chanted for proficiency in any instrument.