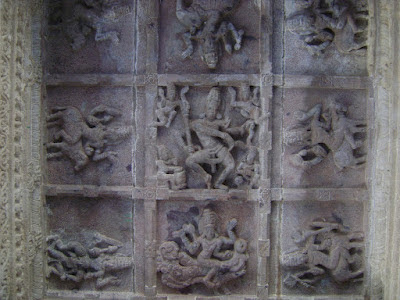 Meaning:Lord Rudra, an expert in distinguishing the good from the bad was incharge of arranging plates for meals. From Pandu theertham (in Seven Hills) to Srisailam (in Andhra Pradesh, situated in Nallamalla Hills, Kurnool District)brahmins,

Meaning:Devas arrived in several groups. Devas and brahmins sat in front of the meals plates assigned for each of them.

Meaning:At that time Lord Srinivasa instructed Lord Brahma not to serve food for the Devas and brahmins without first offering the food to God, for which Lord Brahma responded...

Meaning:''Govinda! You know everything and you are all-pervading. You enjoy every creation in this Universe and are the Dictator in all the worlds! Is there anybody equal to You or more powerful than You?

Meaning: Tell me then whom do You order me to offer this food to??" Lord Brahma questioned. Lord Srinivasa replied with a smile...

Meaning:The Lord instructed that the food should be offered to Lord Narasimha of Ahobilam....

Meaning:Lord Brahma did as he was instructed and also performed great rituals and pooja to the deities at home. All the monks who were assembled there were greatly pleased.

Meaning: cleaned the vessels and started to serve the food, Lord Srinivasa being duly informed of the news (the the Áshtadikpaalakas were cleaning vessels and serving food) informed Lord Agnihothra...
(To be continued.......)
at March 03, 2012