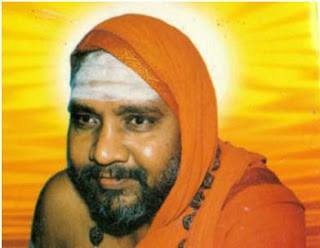 Meaning- O man, I will now tell you how to attain that which gives bliss, that which is wholesome, that which resides in movable and immovable things, that which is absolutely devoid of sorrow and that constant thing which is meant to reach everybody and everything.

Meaning- In order to drive away desperation and for attaining fame and prosperity which is devoid of fear, the Supreme Truth is aptly expounded by wise men who wish well.

Meaning- Only man attains pleasure from the knowledge of elements (earth-prithvi; water-jala; fire-tejas; wind-vayu and space-akasha) and nature. But each and every of that (elements and nature) are perishable by nature and meant to be rejected. Anyone who desires such pleasures can never attain the Supreme bliss and tranquility.

Meaning- The pleasure resulting from an external cause dies as soon as the cause perishes. Whereas bliss of the soul (atmaanandamu) which is created on its own accord (without any cause) is wholesome, complete and flourishes without destruction.

Meaning- Initially man gets attached to material things out of curiosity. Later on he gets entangled in his attachments and is unable to disentangle from them.

Meaning- Man due to his ignorance imagines (fancies) material pleasures in the kingdom of his heart. As a result he is captured by liking them and getting attached to them. Ultimately he is tormented by worries and complications.

Meaning- The strong man having enjoyed great material pleasures for thousands of crores of years is never satiated due to his enamored mind.

Meaning- Desire does not reduce by experiencing and enjoying the material pleasures. Even if he enjoys the pleasures of the material world for hundreds of crores of kalpas (one kalpa is a thousand cycles of mahayugas) he will never be fulfilled.

Meaning- Man who has fully enjoyed all possible pleasures for a long time tires of them and renounces them. Even such a man is subject to temptation. Therefore desire is the enemy of good men.

Meaning- Among people who are bound due to various reasons the most firmly bound are those who are emotionally addicted. Emotion is born out of love, therefore ropes of emotion are impossible to sever.