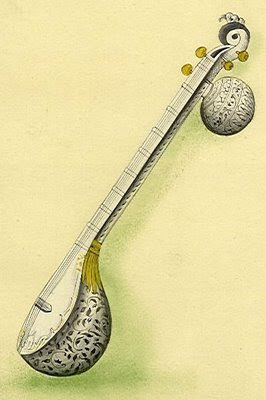 dear madame
That is marvellous madame. There are many people who gather the knowledge but does not want to share it. The people with wisdom prefare to teach and share what they read. It is really a fabulous job you are doing madame, the information you gather and give to us is really fantastic and useful and guide us.These information are treasures so keep writing mam. when I first touched veena I was so excited and when I started playing my excitment overwhelmed, I have never thought about the chakras and compared, Now my practise will be more deeper.
thank u mam
with love
mala

What a lovely post yet again! I am absolutely touched by the depth of your knowledge, devotion and abject surrender to Her who manifests as the divine Veena! Thank you so much for this delightful post.
Love,
Saipriya

Wow!what an article! Thoroughly enjoyed it. What deep insight and knowledge. I feel blessed to be reading it. This is a treasure of knowledge for people like me that is hard to find anywhere else.

Dear madam,
You are really a great person. Not all wish to share their most precious information to others. But, you are doing a great service to mankind by glorifying the Veena. We are indeed lucky to be interacting and gaining knowledge from you.

Dear Mrs.Mala,It is my pleasure to share with you the little I know.I am very happy my articles are inspiring and your veena practice is enhanced.Thank you and love,Gayathri

Dear Ms.SP,It is my pleasure indeed.Whatever I am sharing with you gives me immense pleasure and hope they are of use to your goodself.Thank you and regards,Gayathri

I am very happy that you enjoyed the article,the pleasure is entirely mine.Thank you and regards,Gayathri

Dear Mr.Srinivas,It is true that not all would like to share the most precious things.In my case,it makes me happy and fulfilled to share whatever I know,more so,when it is useful for everybody.I am far from great,I am a very small person.Thank you and regards,Gayathri

Dear Gayathri,
Great article. You have answered another question I have always had about Shobhillu saptaswara.....wondered why he did not compose it in a sampurna raga when he is singing about saptaswaras.
A musician who performs/practises music understanding all such things that you have been mentioning in your articles is more a carnatic music 'practitioner' than a 'performer'.
Please keep writing.
Music Lover

Dear Music Lover,I just logged on to reply to your comment,when I saw your second comment.Please do not worry,I just did not even notice the difference,even if I had, I would only look at the positivity of it,as I always do.I am touched by your clarification.
Thank you for bringing to light that "Sobhillu" had not been composed in a Sampoorna Raga,the thought never struck me.Maybe it is Sri Thyagaraja's way of indicating that the "Sapthaswaras" are not Sa ri ga ma pa dha ni!I will update this post with your kind contribution,thank you and regards,Gayathri

Smt. Subbalakshmi Satyanand, well known as Meduri Subbalakshmi (child prodigy in Veena of the 70s) in one of her prayer-like Veena sessions ...