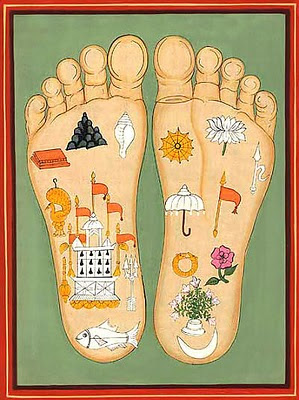 I had always wondered about the importance given to the feet of a person. We touch the feet of our parents, Gurus and elders. We meditate on the feet of God/Goddess. The famous "Paduka Sahasram" by Sri. Vedantha Desikar is all about the footwear ("padukas") of Lord Ranganatha. All the vaishnavite temples have "Vishnu Padam" (Feet of Lord Vishnu).
This subject about feet brings to my mind an incident-In 1993, (just a year before Maha Periyava's Brahmaleenam) I had been to Kanchipuram for the darshan of Maha Periyava. His Holiness was seated in an easy chair, His gaze blankly surveying the overwhelming crowd of devotees thronging the place around Him. Devotees were craning their necks over each other to catch a glimpse of Maha Periyava. The two men flanking His Holiness bent down towards Maha Periyava to whisper something in His ears. Maha Periyava listened to them intently and nodded His head ever so slightly. The two men bent down to lift His legs and placed Them on a stool in front of Him. Placed in that angle, the soles of His Feet were pointed upwards, and the naked soles of His feet were clearly visible to all of us. The devotees standing around me gasped in open wonderment and awe! They started pushing each other for a good view of Maha Periyava's feet, chanting aloud while doing so, "Paada Darshanam, Paapa Vimochanam, "Kamakshi Paadam!" I tried to hold the view of the smooth and glistening soles of His feet with my gaze, intending to store the image in my heart. It was a moment of great significance that left a deep impression in my heart!
That was the beginning of my contemplation on "feet". Due to my habit of interpreting words (lexigram or similar-sounding words), I felt there had to be an authentic theory behind the similar sounds of 'feet' and 'feat' . Feet / 'feat', thought-provoking indeed!
There is always a scientific reasoning behind every religious belief and based on this fact I had studied a little about feet reflexology and acupressure. The subjects are all about applying pressure on minute areas of the feet for healing. This pressure actually stimulates important points on the foot that transfers energy throughout the body to stimulate balance throughout the body.
Reflexology also states that the body is divided into five longitudinal zones on either side of the body totalling to ten. Every part or organ of the body is connected to the feet of the body. Ailments are diagnosed by feeling the feet and to treat the ailment, the corresponding pressure point in the foot is massaged. This also stimulates the flow of energy, blood, nutrients and nerve impulses to the corresponding zone thereby relieving the ailment in that particular zone.
Since feet contain the key points to each and every zone in the human body, the 'sole' of the foot could be described as the 'soul' of the body!
For maintaining the purity of the body temple, it is essential to keep the feet clear from bad energies that are mostly transmitted through footwear. These bad energies are absorbed by our footwear from various places outside our homes. Also the reason why we wash our feet as soon as we enter our homes!
Monks wear wooden 'padukas', probably because wood resists the invasion of negative energies! It is also understandable why we do not wear our footwear inside our homes.
A couple of months back, I fell sick with imaginary fever. The thermometer would read normal temperature, but I would still be feeling feverish. I tried various medication, but nothing worked. A reiki healer and clairvoyant who is a good friend told me that the shoes I used for treadmill were polluted with bad energies which was causing the ailment. As I threw my shoes away I gradually experienced a release from my feverish condition! Shoe is not merely footwear, bad energies are shooed away by shoes!
Our souls are in our soles - the sole reason being that, feet are not just about pedicure!
at February 13, 2010

dear mam you are philosophically very knowledgeable. that s why your music is so divine.

Felt nice reading about Maha Periyava on a Thursday!!
Thank you once again:)

Dear Ms. Sandhya,
Thank you so much for your appreciation. I am only sharing whatever little I know with you. Nothing great at all! Thank you very much again!
Regards,
Gayathri

Dear Mrs. Mythili,Thank you very much!

Your articles are intimate to the soul. They provide "magic nourishment to the heart, mind and soul". Reading them links me to feel the oneness with God.

Recently I have been reading "How to Know God" by Deepak Chopra which is an inspiring work. He says: "God, it turns out is not a person, God is a process". God consciousness unfolds in cascades of stages, each stage important and remarkable in itself. Your articles unfold this consciousness. I thoroghly imbibe the enjoyment from your articles - these are various stages of the process.

This is a great article on a great topic. Feet - our intimate contact -the subtle give and take on a daily continuous basis with Bhuma Devi. As some poet said "I shall never see//A poem lovely as a tree//
A tree whose hungry mouth is prest//
Against the sweet earth's flowing breast...//Poems are made by fools like me,
//But only God can make a tree" we too suck our spirit from Bhuma Devi's breast through our feet.

It is perhaps not without a connections that the 12th Bhava in astrology, that represents feet, also represents spirituality, moksha, self-abnegation; - a watery sign ruled by divine Jupiter in the Kalapurusha's chart.

"Going barefoot is the gentlest way of walking and can symbolise a way of living — being authentic, vulnerable, sensitive to our surroundings. It's the feeling of enjoying warm sand beneath our toes, or carefully making our way over sharp rocks in the darkness. It's a way of living that has the lightest impact, removing the barrier between us and nature."— Adele Coombs, "Barefoot Dreaming": http://www.barefooters.org/

Looking forward to continuous bathing in your articles.

Thanks and regards
Ganesan

Dear Sri.S.Ganesan, Thank you so much for your kind appreciation and encouragement. I am just posting my thoughts, never thought of myself as a writer or philosopher. But seeing your comments, I truly am overwhelmed! Your responses are more informative and I thank you for sharing your knowledge with me, I treasure it!
Regards,
Gayathri

Dear Gayathri
I really loved the article,it made a lot of sense and people usually do not take time off to analyze all this. This article helped in that manner. I guess that is why those with high heeled shoes are far removed from the truth ( materialistic in their pursuit). Great going, keep up the good work and the originality in the writing.

All the best and love

Dear Sham,
Very true that we tend to overlook many vital things in life.Thank you so much for your appreciation, means a lot to me!
Lots of love