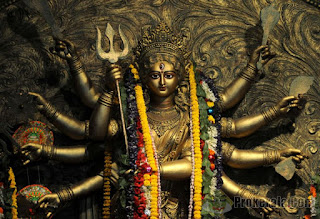 Meaning: Lord Srinivasa along with Goddess Parvathi prayed to Goddess Durga and entered the township.
Devotees of God from both sides ( i.e. from Lord Srinivasa's and Goddess Padmavathi's sides respectively) embraced each other.

Meaning:  Even the wide-eyed Goddess Padmavathi prayed to Goddess Durga " Please present Lord Srinivasa who pervades the entire Universe to me as my husband."

Meaning:After praying Goddess Padmavathi sat on the elephant named "Airavatham" and Lord Srinivasa, who is ever compassionate to His devotees sat astride Lord Garuda.

Meaning:  As loud chants of prayers and vedas reverberated in the surroundings....

Meaning: in the company of people belonging to Lord Brahma's Deva (Godly) sect, sages who belonged to the sect of Sri Suka's brahmin,  large crowds of men and women whose eyes feasted on the sight of Lord Srinivasa.......

Meaning: Along with general crowds and groups of entertainers who played the veena, flute, drums, cymbals, dundhubhis.....

Meaning:accompanied by expert vocalists, Gandharva (celestial beings) musicians, charioteers and ministers,  the wise and just King Akaasha who is unflinchingly devoted and loyal to Lord Srinivasa..

Meaning:led Lord Srinivasa who was accompanied by Goddess Padmavathi towards Narayanapuram in a grand procession..

Meaning:accompanied by women who offered brightly lit camphor and after circulating the three stages arranged in the middle of beautifully decorated four-crossing roads, King Akaasha led Lord Srinivasa to a house specially arranged for the stay of the Lord..

Meaning:The bridegroom entered the house which was decorated by rubies. His relatives were given royal suites for their stay.