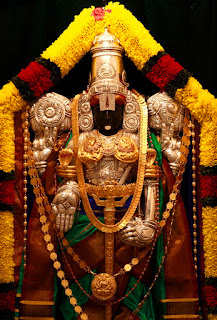 Meaning:King goes to the temple to fetch Lord Srinivasa for the wedding
After all the procedures that had taken place on Lord Srinivasa's wedding day

Meaning:On the evening of Friday, Dasami Thithi, along with His son leading the " Chathuranga Balam" ( four wings of army comprising of elephants, chariots, cavalry and infantry)...

Meaning: along with Thondaman who was the brother of Vasudasa, the priest, relatives...

Meaning: with the complexion of the blue sky, decorated by bells, ruby-studded garment spread over His back....

Meaning:along with the royal elephant Airavatha who had red teeth, growled loudly, had beautiful fans fitted to its ears, along with Lord Indra, the priest...

Meaning:went to the residence of Lord Srinivasa. That castle had thousand pillars...

Meaning:The Conference Hall studded with precious gems was dearest to Lord Srinivasa and constructed by Viswakarma. In that Hall Devas along with Lord Brahma....

Meaning:...appointing Sage Kashyapa as their Director seated themselves in the Conference Hall. Lord Srinivasa was seated on a ruby-studded carpet that was spread in the middle of the conference.

Meaning:The Father of the entire Universe, the Four-Faced Lord Brahma stood with joined hands. King Akaasha who was a great warrior neared the gates of the Conference Hall...

Meaning:accompanied by the priest. On seeing the King Lord Srinivasa rose from His seat...

Meaning:embraced the King and exclaimed," O King! Even though you are old you are great!

Meaning: Why did you have to come to my residence?! You could have sent your son Vasuda to invite me!!"
at July 24, 2015