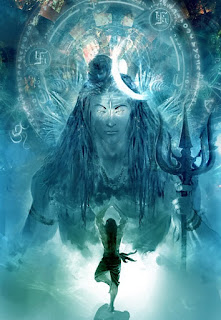 
My favorite actor late Sri.N.T.Ramarao as Ravanaasura  (from the movie Seetharama Kalyanam) playing Veena literally from his nabhi ( nerves and intestines ripped out from his gut region) to appease Lord Shiva. 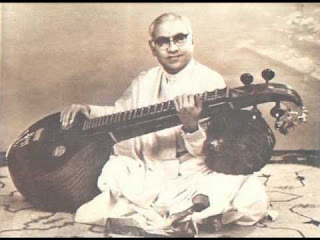 Incidentally gut strings were used in the making of old guitars, especially the Spanish and classical ones. Intestines from dead lambs and bulls were taken, dried and cleaned as thoroughly as possible before stringing them onto the guitars.

The Asura King, Ravana had Moola/Lyra constellation/Vega as his asterism. King Ravana was a great Rudra Veena exponent and knew every nuance of Veena playing. A great scholar and having mastered the Vedas,  Ravana had composed many songs and ragas in praise of Lord Shiva. The musician Emperor Ravana had also competed with Sage Agasthya in music.
Ravana attained a state of Oneness with his Veena by dedicating his Veena playing to Lord Shiva. At one stage he literally ripped out his intestines to use them as Veena strings. It is believed that Ravana made a Veena using his ten heads as the Veena gourd, his arm as the Veena dandi and his nerves and intestines as gut strings of the Veena to play on them. As I had stated earlier, the activation of Sushumna Nadi while playing the Veena happens through retention of breath (Kumbhakam). Kumbhakam takes place when the Veena player is in Samyoga ( 'samyoga' is an act of merging of the practitioner with the music he is producing on the Veena), the act of Samyoga takes place when the practitioner performs from his 'nabhi' (gut) region where the Solar Plexus (Manipura) chakra is situated. This chakra which represents the Sun God and the Gayathri Mantra is said to be one of the most powerful chakras among the seven chakras inside the human spinal chord. Will-power, assertion, leadership, tremendous self-confidence, action and absolute power are the characteristics of solar plexus or manipura chakra. The intestines are governed by the solar plexus chakra. By using the intestines and nerves surrounding the intestines as Veena strings King Ravana had undoubtedly attained Oneness with the Consciousness of Lord Shiva.
Saint Thyagaraja in the charanam of his krithi Mokashamu Galada in Saramathi  says,  "Veena Vaadana Loludau Shiva Manovidhamerugaru..." which literally means "Liberation is difficult for people who do not understand the mind of Lord Shiva, who enjoys playing his Veena in tune with the universal resonance or naadam. Attuning oneself to the divine consciousness of Lord Shiva is "moksha" itself."
Lord Shiva whose Nakshatra is Thiruvadirai/Ardra (Rahu's asterism) in Mithuna Rasi or Gemini  and Ravana who belonged to the Moola  (Ketu's asterism) in Dhanush Rasi or Sagittarius are in mutual aspect with each other (Sama Sapthama Bhavam).
Lord Rama, after killing Ravana went to Rameswaram. The Lord then installed a Shiva Lingam in Ramanathaswamy Temple and along with Sitadevi and Lakshmana offered prayers to the Shiva Linga to absolve the sin (Brahma Hatya Pathakam) of killing Ravana who is a brahmin and also a devotee who endeared himself to Lord Shiva through his Veena!