Saraswati Veena in the true sense COLOSSUS OF VEENA PART- 3 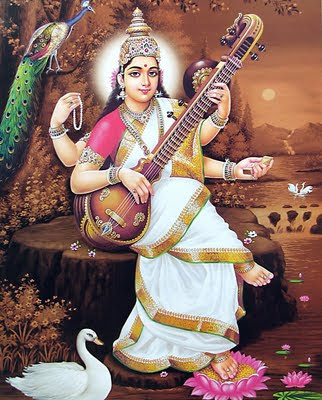 When we analyse the image of Goddess Saraswathi, we realise that She is normally picturised as holding the Veena in an inclined position (like a sitar). As a result, the upper trunk of Her physical body is required to be absolutely straight and erect in order to reach across to the lowest frets of the Veena. Playing the Veena in an erect posture facilitates the kundalini to flow freely in an upward motion (starting from the Mooladhara Chakra towards Sahasrara Chakra). My postings on "Veena Rahasya" and "Deiva Veena-Maanushi Veena" contain further details with regard to this subject.
A few years back, while in conversation with a man who is well-versed in 'tantrik yoga', I was advised to wear an abdomen belt while playing the veena. He said it was necessary to always keep in mind my posture even while engrossed in the melody of the Veena. Practitioners tend to stoop (especially when they are tall and broad-shouldered) while they are absorbed in playing the Veena.
That is precisely the reason why one should start learning to play the veena at a very young age, when the child's head barely reaches the veena dandi. The child's spine is naturally erect, owing to the small trunk of the child. The spinal chord is straight as the the child reaches upwards to run the left hand over the veena frets. By starting from a very young age, the practitioner gains enormous pranic-strength, as the naturally erect spine facilitates the smooth, upward flow of the life-force energy arising from the Mooladhara Chakra.
Looking at Teacher (Smt. Kalpagam Swaminathan), I was able to understand her capacity to play so effortlessly at the age of 87! For somebody who needs to be assisted while walking, she is remarkably at ease as her hands work out the most complicated prayogas on veena. Being of average build, her height seems to have lessened further (due to ageing), forming a natural alignment of her chin and the veena-dandi. Her build, almost like that of a child of 10/12 years, is ideally suited for veena-playing, as her erect spine allows the smooth, upward flow of Kundalini. Physical strength is no match for life-force energy (kundalini shakthi) which can be activated only through erect posture of the upper trunk of the practitioner.

As a matter of interest, anybody could practically witness /experience the difference between playing the veena by a)hunching over the instrument and by b) sitting absolutely erect (without even the slightest bend in the upper trunk of the body). The player would feel tired and insipid while playing in the former position, whereas he/she is instantly rejuvenated when the shoulders are pushed back and the entire upper portion of the trunk is stiff and erect as per the latter position.
One need not worry about posture while playing the modern, distorted versions of Veena that are available in the market. While playing the Saraswathi Veena, every note produced has to be nurtured through Kundalini Yoga which is possible only through correct posture.

Dear Gayathri Amma,
I am getting enormously benefitted from your postings. In particular this posting answered many of my questions regarding Veena playing.
Thank you Amma.

that was a fine article mam
when i first enter my office , i check out if any new article is there and then i proceed to work mam.
with lv
mala

Hi VG Ji,
You have written about the Goddesses Durga Devi, Radha Rani, Madurai Meenakshi, Chinnamastha (etc) in relation to Veena (As all these Goddesses are known to bestow the knowledge of Veena).
Would be great to hear from you about Lord Shiva, in relation to Veena. In fact Lod Shiva is supposed to be always merged in the 'bliss' of Veena Nada.
Awaiting an article about Lord Shiva in your blog (I am sure you would have a 'wealth' of information about HIM).

Dear Mrs. Mythili,Thank you again,I will certainly write whatever little I know of Lord Shiva (as of now, I don't have a 'wealth' of info about Him :))! in my forthcoming postings!Yes, Lord Shiva is the most important deity for veena.

I'm totally awestruck with the immense details that you have managed to explain in layman terms in your blog. I've been ardently thinking of learning veena since my childhood, but never happened due to some reasons. Now, at the age of 30, I still crave to learn veena and ready to spend time for it. I seek your expertise to choose a guru for me. Also, it would be great if you can suggest, whether I need to buy a veena before I start, or should I do so, as I mature with my lessons.

Now that I've found your blog, and I'm confident I'm at the right place for guidance.

Dear Mr. Arvind. Prabhu,
Thank you for your kind appreciation of my blog.Any age is perfect for commencing lessons in veena. Yes, you have to buy a veena initially itself, practice is very important from day 1.If you are in Chennai, you could learn from my mother, in Mumbai, from my sister If in any other place, I will have to find out.You can find my contact details in the Musicians Diary brought out by Mudhra.
Regards.

So kind of you to suggest your mother as my guru. I'm in Chennai and I'll make it a daily routine to practice.

I'd be grateful if you can help me with your mother's contact details.

Thank you so much for guiding me.

Dear Sri. Aravind Prabhu, I have mailed you the details.

Thanks for taking time to reply back amidst your busy December schedule. For some reasons, I do not see your mail in my inbox. May I request you to resend the same at your leisure please.

Dear Madam,
I got to know about your suggestions regarding Veena Gurus, which I have been thinking of asking you for quite sometime, but felt shy, as I am just a beginner. I am hopeful that one day I'll be able to get the tutelage of some Guru. I am earnestly waiting for that day. I bought a Veena from Saptaswara last year (and felt good that you suggested this name also) and practicing on my own. Hope my dream of learning Veena will come true someday

Dear Mrs. Kalyaani,
Surely your dream will be fulfilled, every fervent thought is a penance!

Thanks a lot. I will talk to her soon.

ma'am! thanq for giving a valuable information about veena as i'm longing to learn playing it.
sincerely yours,
suhrudhaa
8th std student