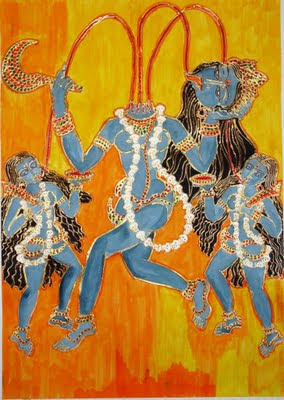 Chinnamasta is a deity who has always been in my thoughts. She is responsible for veena and the power behind veena-playing. Chinnamasta is the sixth Goddess in the "Dasa Maha Vidya". She resides in the Surya Mandala. She is the deity who represents the planet Rahu. The other deities of Dasa Maha Vidya and their planetary associations are as follows:-

Dear Sri. Kannan, You will find the answer in the revised version of my article.Gayathri

Gayathri garu,
Thanks for the acknowledgement. The association of "rahu (who's head is separated, and has a "snake (kundalini)" as the rest of his body has a striking resemblence to "Chinnamastha's" own apperance as described by the tantriks (and as you showed above)
Sarma Duddu, Minneapolis, MN, USA

Sri.Sarma Garu,
Thank you for reading the posting. I agree with your analysis that Chinnamasta does resemble Rahu as depicted by tantriks.
Gayathri

Thank you for sharing this information, it was uplifting in every way

Thank you so much Sham!

Dear Emani Gayathrigaru,namaskaram.Your above article on chinnamastha and veena is very interesting.In this connection I draw your attention to Kavyakantha vasishta Ganapathi Muni,who has shown to the world the power of Chinnmastha and Kpalabhedana Sidhi.He was the only one yogi in India,after vedic rishis who lived 14 years after getting his skull broken by Tapas Shakthi(not by breaking coconut after one's death)under the aegis of Bhagavan Ramana Maharshi. Thus he proved that Upanishad mantras like 'vypoha seershakapale....."-Taittareeayopanishsad are not false and can be proved concretelyThere are many yogis who are upasakas of this Tantrik deity,but none of them achieved this rare sidhi.The Present Peethadhipati of Kurtalam Peetham,Sri Sdheswarananda Bharathi Swamiji, is a great sidha himself, is also a upasaka of Chinnamastha in the footsteps of Nayana.Kavyakantha Vasishta Ganapathimuni's sanskrit works were brought out by his disciple Late Natesan in 10volumes.A lot of work has to be done for bringing out his Telugu works-Murhty

Dear Sri.Murthy,
Thank you for enlightening me about Sri. Kavyakantha. I have heard a lot about Him and am trying to acquire His book, "Uma Sahasram". Kindly let me know where I could have the darshan of Kutralam Peetadhipathi. Also would like to know how and where to get the works of Sri. Kavyakantha.
Regards,
Gayathri

Sri.Murthygaru,
Thank you for the kind information you have shared. Extremely kind of you.I shall note all the details for my requirements.
Regards,
Gayathri

Kourtalam Swamiji has spent great amount of time on sadhana of Chhinnamasta. He has several experiences related to Her and I had opportunity to learn those from him.

I would be very happy to know in detail about the same. I am interested to know everything there is to it,
Regards,
Gayathri

Does Devi Chinnmasta worship helpin marriage of a girl, she has Rahu in Lagna ?

If Chinnamasta is the prime deity to appease Rahu, surely She should help in removing obstacles caused by a weak Rahu in lagna and bestow marriage on the native.

Maa Chinnamasta Mahadevi represents sushumna nadi in yogic parlance. She is atomic energy unlike Maa Kali who is electrical energy.

Ofcourse both are extremely powerful forces. Sri Kavyakanta Ganapathi Muni is very rare versatile mahatma who had kapala moksha during his life time in physical sense.He ofcourse would had done intesne sadhana for many lives to have this in this life time.He is a rare gem who never was known much till Kapali sastry or David Frawley wrote the books on tantric goddesses.

You may refer to "mantra mahodadhi" for more information on Maa Chinnamasta.

Though there is lot of romantisization about experiences in the sadhana, it is purely personal and is direcly proportional to what we perceive Maa to be. Maa cannot be put in a cup of coffee and assumed that she is a cup:-)

My Guru initiated me into this though she is only for warriors and saints and is supposed to be very kind. She destroys everything and reconstructs and protects the deity.

Rahu bows down in abidance to her sight as she is the one who makes him work as her vibhuti.

All manisfest world works in submission to Maa and they better.

I can share more in private as these are very secretive tantric practices.
Jai Maa

Dear Sri.Sri,
Thank you for your kind comment I shall surely refer to Mantra Mahodadhi.I also thank you for all the wonderful info you have given on Goddess Chinnamasta.
Regards,
Gayathri

Thanks for the enlightening article.

Dear Sri.Murthy,
Thank you for the appreciation!

Dear Sri ji
I have read this article & seems to be very interesting
Can you please tell any person who performed this sadhana recently.
I am passionate to do the same.
Hope to get a reply soon.
Regards
Gandhi Kumar
gandhi_yousa@yahoo.com
Kharagpur-WB, INDIA
Banker-IDBI

Dear Sri.Gandhi,
Thank you. I have no idea about anyone doing this sadhana presently. There are books (in telugu) available in Tiruvannamalai Ramana Ashram that could give you some guidelines.
Regards,
Gayathri

Please be in Touch With Sri LANKA KRISHNA RAO GARU of Srikakulam in Andhra Pradesh. He is a Great KUNDALINI SADHAKA and a Master in SRI CHAKRA NAVAVARNA ARCHANA. His e-Mail ID is "krishnarao lanka"

Thank you very much for the info!!

Dear Shrimathi Gayathriji,
Complete works of Nayana are seen in scribd.com. The below link will lead you to Umasahasram. I don't know in which volume of the 'complete works' umasahasram occurs.
Regards
B.SRINIVASAN
http://www.scribd.com/doc/113203496/Vol-1-Collected-Works-of-Ganapati-Muni-The-Book-of-Adoration-Stotragranthamala-Part-One

Cchinnamasta is a Godess worshipped by hardcore Yogis and Tantrics. She is the Lightning that runs through the Vajra naadi. She takes Her worshipper away from sensuality and makes him Urdhvaretas (One with vital seed drawn up). Varnini and Dakini represent Ida and Pingala here and the central stream of blood represents Sushumna /Suzhimunai(literally tip of the vortex where name and form dissolve). She takes her adorer from Mind to No-mind or the state of Turya.

I am a disciple of KavyaKantha Ganapati Muni Garu, while reading some article on Chinnamastha, where very highly respected scholars and Spiritual gurus mentioned that out of Ten Mahavidya only Chinnamastha and Bhairavi, and some also said Dhumavati can be worshipped only by Left wing path, I.e. Vamachar Sampraday, but I am of believe that Ganapati Muni garu is the only Tapasvi in this kaliyuga after Parashurama to attain Kapalbhedan an lived for 14 years and also only at least known to me have attain all 10 mahavidya siddhis by Dakshinachar way only.

He was also blessed with the amrutam from Bhuvaneshwari devi after his tapas who is one of 10 mahavidya.