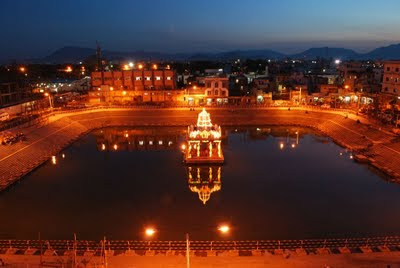 Whenever we go to Tirupathi, our eyes strain to locate and sustain within them the sight of the Lord of the hills, (even if it is only for a few seconds!). In the process we are not aware of nor do we pay attention to other wondrous details attached to the divine seven hills.

Narayana Giri which is situated 2 km. from the temple, is the highest point in Tirumala. It is believed that Lord Narayana, as he descended from Vaikuntham, first set His foot here on Narayana Giri. The foot print is said to be available here.
There are many lakes in Tirumala. Swami Pushkarini, which is situated towards the west of Sri Varahaswami Sannidhi and to the south of Sri Venkateswaraswami Sannidhi is said to be the purest and holiest lake. It is believed that Swami Pushkarini was brought all the way from Vaikuntham (where it had belonged to Lord Vishnu), to the Seven Hills by Garuda, for the sport of Lord Venkateswara.
Sri Venkatachala Mahathyam, which branches off from 'Sri Skaanda Puranam', states that Swami Pushkarini is among the seven most important lakes situated in Tirumala. They are the 1)-Kumaradhara Lake, 2)Thumburutheerdha Lake, 3) Akasha Ganga Lake, 4)Pandavatheerdha Lake, 5)Papanashana Lake, 6) Devatheerdha Lake.
Each lake has a special significance attached to it.
1)-SWAMI PUSHKARINI-The merging of three crore lakes in Swami pushkarini occurs on 'Mukkoti Dwadasi' (the twelfth day of the fortnight of Dhanur Masam). It is believed that bathing in Swami Pushkarini on this day, is equivalent to bathing in the Holy Ganges.
2)KUMARADHARA - This is where Lord Subrahmanya Swami and His spouse, Devasena had bathed and offered Their prayers to Lord Venkateswara. It is stated in Sri Venkatachala Mahathyam that bathing in Kumaradhara on a full moon day, while moon is in Makham constellation, during the month of "Magha"(between January 20th to February 20th) while sun is in Aquarius (kumbha rasi), during the afternoon time, yields great results equal to bathing for 12 long years in all the holy rivers including Ganges. It is also recommended that the devotee should give some charity on the shores of Kumaradhara after bathing.
3) THUMBURUTHEERDHAM- It is stated in Sri Venkatachala Mahathyam that bathing in Thumburutheerdham on a full moon day while moon is in the constellation of Utthara Phalguni, during 'Phalguna' month (between February 20th to March 20th), while sun is in Pisces, during brahma muhurtham (early hours of dawn) ends the cycle of births of the devotee. There will be no rebirth by bathing here on the above mentioned day and timing.
4)AKASHA GANGA-Sri Venkatachala Mahathyam states that by bathing in Akasha Ganga during the early hours of dawn, on a full moon day, while moon is in the constellation of Chitra, when sun is in Aries (between March 20th to April 20th) in the month of Chaitra, the devotee attains salvation.
5)PANDAVATHEERDHAM- Sri Venkatachala Mahathyam states that by bathing in Pandavatheerdham on Dwadasi, on a Sunday during waxing moon (Shukla Paksham) and on a Tuesday during waning moon (Krishna Paksham) in the month of Vaishakha, when sun is in Taurus (between April 20th to May 20th), during anytime of the day, the devotee will be released from difficulties and sorrows permanently and attains liberation.
6)PAPANASHANATHEERDHAM- The epic states that by bathing in Akashaganga during waxing/waning moon on Sunday, especially on a day that combines Hastha Nakshatram and Sapthami thithi or any other auspicious star and thithi eradicates all the sins committed in crores of births and relieves the devotee of karma.
7)DEVATHEERDHAM-The epic states that by bathing in Devatheerdham while Jupiter (Guru) is in Pushyami Nakshatram, moon is in Shravana Nakshatram and on a Monday, the devotee washes of all sins which he/she had committed knowingly/unknowingly for the past many births and attains soul-liberation.
at October 01, 2009

That was a very informative article on the lakes at Tirumala. Didn't know the lakes were seven in number too. Dr. Balamurali Krishna, in one of his compositions (don't remember which one) compares the seven hills with the saptaswaras. I was reminded of that as I read your article.
Thanks for writing about the abode of Lord Venkatesa.
Music Lover

Thank you madam, for writing about the lakes at Tirumala and its sacredness.

Dear Music Lover,
I am happy to share the details with you. Hope to bring out more such facts. Thank you for the appreciation, Gayathri

Dear Sri. Srinivas,
It is my wish to post articles on rarely heard matters of importance and relevance. Thank you for the appreciation, Gayathri

hi gayathri mam and rasikas,
i came across this link in youtube hope u all enjoy..

Dear Sri.Kannan,
Thank you for the link. I have posted the same.