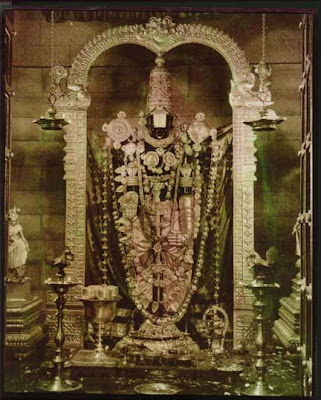 "I am That!', "You are That!"... an age-old saying coming from great spiritual masters, the import of which we understand without realising, we empathize without experiencing and trust without attaining! The end result is frustration which we supress by rigorous pooja-meditation or even charity routine.

I remember discussing the "there-and-yet-not-there" syndrome with a musician who observed that the attuning of Jeevatma and Paramatma could be compared to fine-tuning a radio towards achieving accurate band frequency. As we all know, it is very simple, yet not that simple ,especially when the radio is out of range (like our lives which are entangled in this material world), and worse still, without an antenna (bhakthi).
I came very close to "feeling"God during one of my visits to Tirupathi. Inside the sanctum-santorum of the temple, I caught a fleeting glimpse of the Lord from His Feet to His Head ("Aapadamasthakam") trying to literally "sponge-Him-off" with my concentrated gaze. Realising that any amout of time is not sufficient to drink in the sight of Him, and any number of eyes insufficient to feast themselves on Him, I resignedly turned back to walk out of the sanctum santorum. Normally I move backwards, trying not to lose sight of the Lord as far as possible, but that was the first time I turned back to walk out without a backward glance. As I did so, my breath stopped at the sight I witnessed! A God, Whom I could not absorb in the given few moments of Darshan, had manifested everywhere in front of me!!!! I felt as though lightning had struck me when I caught a glimpse of everybody's EYES!!!!!Every devotee was staring at the super-imposing figure of Lord Venkateswara,their eyes wide-open with an expression of limitless rapture and wonder! The sight of so many pairs of eyes exuding naked and wondrous devotion seemed like an extension of God Himself!The devotees were oblivious to their surroundings, looking entranced and mesmerised by the sight of the Lord. Their eyes were aglow with the dazzling radiance cast by the precious gems adorning God and the bright lamps lit around Him. Becoming aware of God, in the eyes of everybody present there, my palms felt sweaty and I got goosebumps instantly!!! Had I receded with my back towards the exit and facing God, I would have missed God! Lord Venkateswara's conveyed Himself through the eyes of His devotees!!
at October 18, 2009

Dear Gayathri garu,
Thanks for sharing your wonderful experience. You describe it so well....you saw Him in the "eyes of the beholder"! Nice title. Lord Venkateswara is indeed everywhere!
Music Lover

dear madame,
it is a fine article where u shared your feelings,Your spiritual quotient is very high, which make you feel the presence of almighty
with love
mala

Dear Music Lover, It is my pleasure, thank you very much!
Dear Mrs. Mala, I am sharingmy experiences with pleasure and in all humility. Please don't attach any importance to me for doing so. Thank you for your affection.LoveGayathri