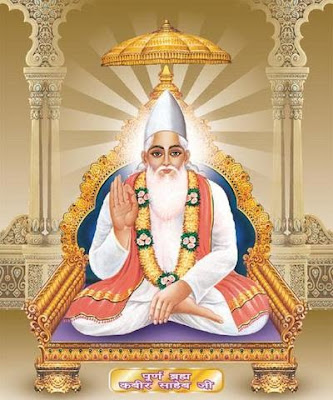 'Shabda is the power of the Supreme Being that has created even the Creator of the three worlds. The world of illusory manifest-ation came into being from the power of Shabda, the Divine Word, and it is sustained by it. The Lord pervades the entire creation in the form of Shabda.

True secret of Shabda is known only to the perfect Masters and it can be experienced by their Grace (Gurukripa), neither to be expounded nor to be analysed. This is one of the most important reasons why musicians have to religiously render the compositions of the "Mummoorthi Composers" for attaining the Grace of these saint composers.
Saint Kabir distinguishes the divine word or Shabda from the words that can be spoken, written or read.
This is the distinction between "Dhunyathmika Shabda" and "Varnathmika Shabda". The latter originates from the former. Spoken language originates from pure, unarticulated sound. This is the Shabda Kabir refers to. The mantra leads to that pure Shabda, that has the nature of Space. That is why it is also called the "Chidaakaasha Vani", the song of the Space of Consciousness.
True detachment and desirelessness come as a natural result of the practice of Sound/Shabda. Therefore it is useless to pursue austerities as an end in themselves.
When the aspirant goes within and contacts the Shabda, he naturally develops "premabhakthi" or love for God.
Kabir says: Apply yourself, my friend, to the pracitce of Shabda. The Shabda from which even the Creator came into being. Imprint Shabda in your heart, O friend! The vedas and the scriptures extol the merits of Shabda. The Shabda that sustains all shabdas in the world (that is: the primordial Shabda).Men, sages and God sing its praises yet they do not fully know its mystery. Shabda is the Master, listening to the Shabda one becomes the disciple.(The Shabda that Kabir refers to cannot be repeated, it can only be heard and listened to. By attending to that Shabda which rsides in the heart region, one naturally attunes to the Shabda to attain liberation.)
Kabir further states that people who repeat mantras mechanically do not enter the door of the Shabda that is behind every mantra. There is a difference between external repitition of the name (mantra) and internal listening of the True Word or Shabda which is primordial (inarticulated).Kabir reaffirms in His Sant kabir Ki Shabdavali that a person's life, achievements and material possessions are wasted if he is unable to taste the True Word or Shabda.He also states that between Shabda and Shabda there is a vast difference.He instructs,"Churn the Primal Shabda and realise the truth, O Friend!"
The Kabir Bhajans which my father, film music director, late Sri. G. Aswathama had composed for "Bhakta Ramadasu" (1964,Telugu) were sung by the legendary singer, Mohammed Rafi. Each bhajan had been composed soulfully by my father and sung soulfully by Mohd. Rafi Saab.After recording these numbers for my father, Sri.Rafi had given the title of "Naushad of the South" to my father. In this movie Sri. Chittoor Nagaiah Garu had tuned all the Ramadasu Krithis and also acted as Bhakta Ramadasu, the bhajans were composed by my father. These songs move me to tears out of missing my father, as I can touch my father's soul through these songs! I have provided links for my father's compositions sung by Mohd. Rafi for Bhakta Ramadasu below:-
The music direction for all Kabir Bhajans in the film is by my father, Sri.G.Aswathama and not Sri.Chittoor V.Nagaiah ( composer of only Ramadasu Krithis and enacting the role of Bhakta Ramadasu in the film) as wrongly mentioned in musicindiaonline.
http://www.musicindiaonline.com/p/x/CsK_x14VT9.As1NMvHdW/