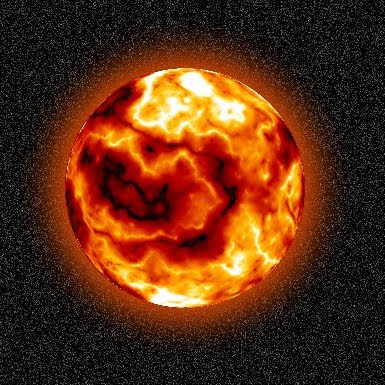 Above is an image of planet MarsMars has been in debilitation in Cancer for nearly 6 months (right from October 2009-May 26th 2010). Mars being a fiery planet, its debilitation generally causes world wide disturbances on the political arena, terrorism, aggressive tendencies in women and children (Cancer being a moon sign), crime rates and general violence. Thankfully Jupiter's transit in Pisces from May 2nd till Mars's departure from Cancer on May 26th could slow down the aggressive Mars, the fifth aspect of Jupiter on Mars is most welcomed by Aries, Gemini, Cancer, Leo, Scorpio, Sagittarius, Capricorn and Pisces signs.
No science is superior to God:-
"Sooryendubhouma Budhavaakpathi Kaavya Souri
Swarbhaanukethu Divishathparishathpradaanaa
Twaddaasa Daasa Charamaavadhi Daasadaasa
Sri Venkatachalapathey! Thava Suprabhaatham!"The sloka above (from Sri Venkateswara Suprabhaatham) states that all the planets are subservient to the Lord, directed and maneuvered by Him While unconditionally accepting the above, astrology could still be viewed as a very relevant science. The Law of Karma being the determining factor behind the planetary alignment in one's natal chart, I strongly believe that our good deeds could strengthen the weak planets in our natal charts, likewise sins and bad deeds could contaminate the best 'yoga' in one's natal charts.
A business man who ran into tough times and bankruptsy knew just how to get his fortune back. He simply shut down everything (his residence and his business) and went away to a lepers' colony to serve them. He spent nearly 6 months serving the lepers dedicatedly. On his return, he found that his business not only picked up momentum rapidly, but flourished like never before!
Even small gestures add upto good Karma. A simple smile invokes good karma! Regardless of whether it is a salesperson from a famous brand name, hellbent on demonstrating his vacuum cleaner and water filter (never mind if you don't want to buy it, he is only obsessed with demonstrating the item), or the innumerable couriers you have sign for in a day - wedding invitations ,arangetram invitations etc. etc.,umpteen wrong numbers one receives on the landline, the servant not turning up on one of your crucial days, the list is too long to complete; the bottomline is-SMILE kindly at everybody! It is true that even a frown or a minor show of irritation (that could hurt many sensitve souls like me) adds up to bad karma. Smile even when you are simmering within. After all, doesn't every religion demand the same thing? Smiling comes easily when you know that it can lessen the intensity of a bad planet in your natal chart!
Serving a cause, a sickly person, keeping company with a lonely person, offering solace and comfort to destitutes, emotionally deprived and abused people, being generally kind, helpful etc. nullifies bad planetary alignment and their consequences in one's natal chart.
The following are the best ways to get out of misfortune:
1)Healing a sick person (it could be through Pranic or Reiki, charging a reasonable fee for healing is perfectly alright).
2)Feeding a hungry or an under nourished person.
3)Offering shelter.
4)Keeping company with old and neglected people and orphans.
5) Serving handicapped or terminally ill people.
General patience, kindness, generosity, love and warmth contribute towards enhancing one's fortune in life! Not to mention that optimism and positive thinking literally eradicate doshas from one's natal chart.
This posting started with the lengthy transit of debilitated Mars in Cancer, to enter Leo on May 26th and to stay there till July 20th, 2010. How is it going to be for the 12 moon signs while Mars transits Leo?

Vrishabha Rasi (transit in 4th house)-(Krittika 3 padams, Rohini 4 padams and Mrigasira 2 padams):-
Lack of happiness and peace, loss of position and humiliation. Mother should be taken care of.

Mars being a fiery planet, the results due to its transit in unfavourable houses may sound a little scary, but as long as we know that karma depends upon our actions and that natal charts are ever changeable through attitude and behaviour, there is no cause for worrying!!
P.S:To appease Mars, prayers to Lord Subrahmanya Swami, fasting on Tuesdays and "Angarakam" in Surati are recommended.

While on Mars, the famous saying, "Men are from Mars and women are from Venus" has a contrary functioning when it comes to instant attraction and chemistry between man and woman. It is Venus in the man's chart and Mars in the woman's chart and their respective placements in mutual charts that are given primary importance in determining mutual attraction. Woman's Mars and Man's Venus in conjunction, opposition or mutual squares (kendras) cause deadly attraction and magnetic pull towards each other. In such cases the benevolent aspect of man's Jupiter on woman's Mars safe guards the woman's position, by leading to matrimony in most cases.

Do e-smiles count too??? I hope they do.

i am a follower of your very good blog.However if i may, i would like to disagree that smiling is of any significant importance especially if internally one is not reflecting that mood. Isnt that then just deception? IT is not smiling that reduces negative impact of natal planets but inner contentment borne from detachment/vairagya.In the same way that vairagya will allow one not to be influenced by others behaviour to oneself, be it a frown, abusive remark , etc.. kind regards sanjay

Dear Sri. Sanjay, Thank you for your appreciation!While totally agreeing with you, I would like to clarify that in my posting the importance given to outward smile ( atleast) is due to the stress levels of our day to day and emotional lives. In my posting I had addressed the average person with common problems in daily life.
If anybody could achieve vairagya and detachment under the given circumstances, nothing like that!
Kind regards,
Gayathri

Dear Gayatrigaaru,Namaskaram.The photo of Mars is very beutiful and and attractive.The vedic saying is "Yatha Brahmande thatha Pindande". The heat of the Agnigundam of Brahmandam will certainly be felt in Pindandam.
Thanks for ur nice posting-Ganti lakshmi Narasimha Murthy

It is so wonderful to see you talk so deeply about spiritual and esoteric topics. Your mastery seems to extend much beyond the divine veena to several occult subjects which is the grace of the divine. To me, you and the veena are synonymous. May God bless you with wonderful health and long life and may your divine playing on the veena play a great part in healing the world and its problems.
Regards,

Are you the musician (the multi-instrumentalist), Sri. Vijay Venkat?! I am very happy that you have visited my blog! Please, it is not mastery, only a genuine interest to share with everybody whatever little I know (same applies to my veena too),if like you said, my small contribution could someway help in healing even one person, I would consider myself to be the most fortunate person!
Thank you for your kind appreciation and greetings, wishing you the same!
Regards,
Gayathri

Sri.Vijay Venkat, I felt I didn't thank you enough, I am touched and honoured, such appreciation coming from an artiste of your calibre!! Thank you!Regards,Gayathri

Gayathri Garu, Namasthe! I am honoured. You are proving again as to how great a human being you are. Given your divine musical abilities and extraordinary spiritual perceptions, you are a living example in humility for one and all. Kindly don't address me as garu, just Vijay or Vijay Venkat would do. I chanced upon your site and found it extremely interesting and your knowledge is immense and your patience in putting up so much material is wonderful. It is God's work and is blessed. It is a great service to people through your extraordinary music on the divine veena and through these blogs. I look forward to reading more. It was an honour that you attended my concert long ago. If anyone has to know how a veena has to be handled or how the gamakas and subtle nuances of our divine music should be played on the veena, you are the one and only example ever. Namaskarams.

Dear Sri.Vijay,
Thank you again !With your best wishes I hope to do as much as possible through my music and blog. I had started this blog casually and now it has become a major interest to me.
I remember listening to your wonderful concert in R.R.Sabha. Your natural tone of gottuvadyam (without any affectation)was splendid not to mention your talent in music.
Such praise coming from you will be cherished by me forever.
Thanking you and Namasthey!
Gayathri

Thank you very much for your kind words. Looking forward to reading more of your blogs. Praying that you always have the best of health and play your wonderful music for many many decades to come, giving joy to one and all.

An amazing coincidence (or maybe not?): I discovered your blog just last week, so I read this article of yours only a few days ago. Within two days of reading your write-up about a businessman serving lepers to undo his past karma, I received a call from the Leprosy Mission of India asking for a small donation! The last time they had called me asking for a donation was more than a year ago, or maybe even two years ago, I think. Plus, there are 365 days in a year, so even if they were planning to ask for donation this year why did they end up calling me just two days after I read this article of yours? Puzzling..

I am very happy to know this, anything that leaves a deep imprint on your subtle body conveys its own message to the cosmos, acknowledged and rewarded! Thank you