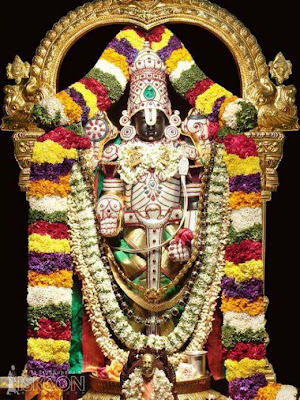 Meaning:As Lord Kubera completed His speech, Lord Srinivasa said," The "Dasavatharam" (ten avathaaraas,'incarnations') had taken place during one day for Brahma. (Srimad Bhagavatham states that 1,ooo cycles of the four yugas (one cycle of four yugas equals 4.32 million years, which is also known as one "kalpam")....

Meaning:Whenever I incarnate (take an "avathaaraa"), wealth is neither supplied from Vaikuntham (the celestial world of Lord Vishnu) to Bhoolokam (earth where human beings reside), nor is the wealth carried from Bhoolokam to Vaikuntham....

Meaning: I take human form in adherence to the circumstances and times, therefore I appoint you as the caretaker of the wealth and give me when I need it!", as Lord Srinivasa asked..

Meaning:Lord Kubera replied,"O Lord who adorns the discus ("Chakram"), how can I lend money to You who reincarnates according to changing times and cicumstances?!....

Meaning:Just like how a poor man would seek loan from a rich man, You will have to apply for a loan in writing (document) and I shall then give You the required amount!"....

Meaning:Lord Srinivasa asked Lord Brahma, "O Four-Faced One! How do I draw a written document seeking loan?" Brahma replied as follows,"I,Srinivasa am the receiver of the loan. Kubera is the giver of the money....

Meaning:In the 'Yuga' of 'Kali', in the year of 'Vilambi' (name of the year according to vedic panchangam), in the month of Vaishakha (31 days starting from April 21st), on the 'Tidhi' (date) of "Shuklapaksha Sapthami" (seventh day of the waxing moon), for my wedding......

Meaning:With an agreement to pay back with interest a loan of fourteen lakhs of in the form of "maadalu" (currency during those times) bearing the imprint of Sri Rama has been received from Kubera.....

Meaning:Receiving the amount from Kubera, an agreement to return the loan with interest was subsequently issued by Lord Srinivasa. The period between the first year of the wedding to 1,000 years was marked as...

Meaning: The time given to Lord Sreenivasa for returning the loan with interest to Kubera with Lord Brahma and Lord Shiva...

Meaning:And as the third person, theBanyan Tree as witnesses", as Lord Brahma dictated, Lord Srinivasa Himself drew the agreement with His own Hand....

Meaning:And Lord Srinivasa handed over the document to Kubera and told him.....