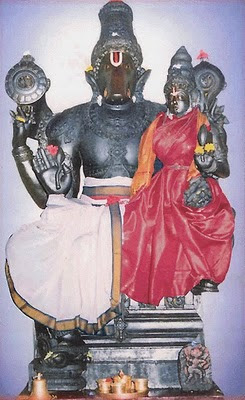 Above is a photograph of Bhudevi Sametha Sri Varaha Swami

Meaning:Lord Srinivasa followed all the necessary procedures for prayers of the tree which is worshipped by the Divine clan (Devas). After that, He plucked a small branch from the tree...

Meaning:And wore it on His head, and accompanied by auspicious instrumental music, He returned to His throne.

Meaning: Lord Srinivasa asked,"Vasishta! Where should I place this tree (Samee Vruksham) which is my 'Kula Deivam'? While He asked...

Meaning:....As each and everything has a place of its own, it is mandatory to place the Divine tree where it belongs for the purpose of worshipping, as opined by the elders and as decided by Lord Brahma.'

Meaning: When Narada told as above, Lord Srinivasa, along with Sage Vasishta went to the place where Lord Varaha resided and told Him as follows:..

Meaning:"Govinda! I wish to marry with Your blessings and Divine Grace! I invite you and Bhudevi to the residence of Aakaasha Raja..

Meaning:You are the Guru (Acharya) of the entire Universe! I want to fulfill all my duties with you Divine Grace!" Lord Srinivasa spoke reverentially.

Meaning: Lord Varaha said," Srinivasa! My friend Vakula is already with you! Please do not insist that I should come, as my paddy field is fertile!"
at May 04, 2010