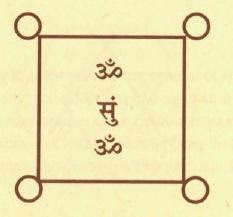 YANTRA FOR SLOKA NO.83

Literal Meaning:"O Daugter of the Mounatain! Surely the five-arrowed Kama-Deva has, in order to conquer Rudra, converted Thy two shanks as quivers to store therein double the number of arrows he is credited with. For, at the end of Thy feet are seen, under the guise of Thy toe-nails, ten crescent-shaped arrow heads sharpened on the whetstone of the crowns of prostrating divinities."
Mode of worship:Yantra to be made on gold plate. Sit facing East. Chant this sloka 1000 times daily for 12 days.
Archana:Chant Lalitha Sahasranamam offering red flowers.
Offerings:Sweet-gruel, coconut, fruit and honey.
BENEFICIAL RESULTS:In case of a nation, power to route enemy's army. In case of an individual, power to subdue enemies and obtain high positions.
Literal Results: Obtaining power to single-handedly fight against large groups of enemies and to emerge victorious. Best sloka for effectively subduing enemies, especially in the form of abusive male spouse/lover.
at September 08, 2009 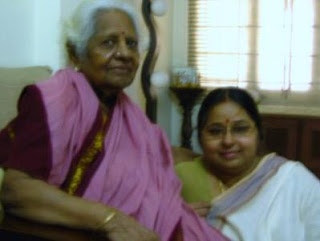