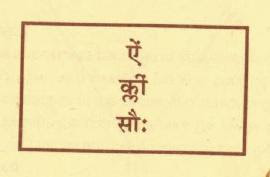 YANTRA FOR SLOKA NO.59

Literal Meaning:"I fancy that Thy face, having two ear-ornaments and their reflection in Thy glistening cheeks, is verily the four-wheeled chariot of manmathaa, the God of love who can stir the mind of people to its depth. It is seated in this chariot of Thy face that he became valorous enough to inflict pangs on the Lord of Pramathaa's(Shiva's) poised for fight against the Thripuraas mounting the earth-chariot having the sun and the moon for its two wheels."
Mode of worship:Yantra to be made on gold plate or fine turmeric powder. Sit facing East. Chant this sloka 1000 times for 45 days.
Archana:Chant Lalitha Thrishathi offering red flowers where the letter 'aim' is written and Durga Ashtotharam offering white flowers where the letter 'sau' is written on the Yantra.
Offerings:Rice cooked with green-gram pulse and jaggery; honey and milk.
BENEFICIAL RESULTS:Gaining mastery over all and fascination of women.
Literal results:Extremely magnetic to the opposite sex.
at September 06, 2009