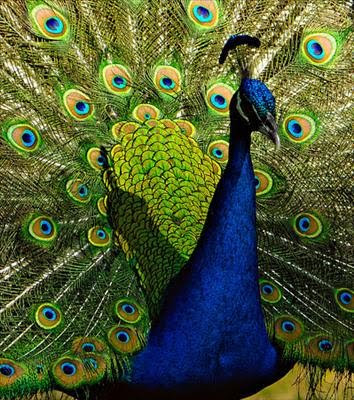 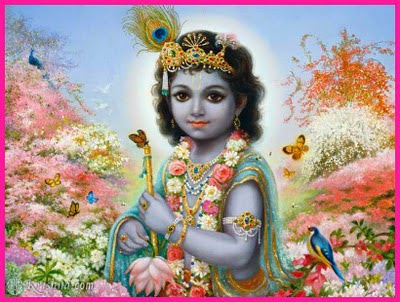 Learned scholars and pundits are aware of the fact that Lord Krishna had never cohabitated with any of His 16,000 wives. It is blasphemous to view Lord Krishna as a mere human being in whatever sphere of His 'Avathaara'.. His Divine presence and "saanghathyam" (company) gave Ultimate contentment and joy to all His 16,000 wives. His divinity was overpowering, throwing open flood gates of overflowing love residing in the center of the hearts of all His wives.
This pure and divine love is termed as "Bhakthi Yoga", which is sublime and not in the least related to physical desire or chemistry. The peacock feather adorning Lord Krishna's forehead depicts the purity of the Lord. Hindu mytholgy claims that peacocks are pure and chaste. It is also largely believed that a peahen conceives by consuming the teardrops of a peacock in order to maintain the pristine purity of the peacock.
Peacock is also the 'vaahana' (vehicle) of Lord Subrahmanya Swami. The Lord was seated on a peacock when He fought Surapadma.
A certain section of tribals firmly believe that Goddess Saraswathi changed Her "vaahana" from the Swan to a Peacock!
In Ramayana, Sage Valmiki has stated that Bharatha was assisted by peacock breeders called Mayoorakaas when he went in search of Lord Rama during His exile in forest. Separated from Sita, Lord Rama expresses His grief to His brother, Lakshmana. In His conversation, Lord Rama makes a special mention of the affinity between a peacock and peahen lamenting that He was not as fortunate as the peacock which is inseparable from the ever-loving peahen! During their separation, Lord Rama recalled how Sita clapped her hands daintily to the dancing steps of a majestic peacock on the branch of a "Kadambaa Tree". That particular peacock became as dear as a son to Lord Rama.
Peacock represents the spring season. The joyous dance of peacock is associated with this most romantic and aesthetic season. The ragas Vasantha and Brindavani are strongly associated with this bird and are said to invoke the beautiful peacock dance, as it spreads its enchanting feathers!

The note "C" in the western music and the shadjamam of Indian classical music are described as the voice of the peacock by renowned musical treatises. Even veenas are made with peacock heads in the place of lion heads.
at May 24, 2010

Dear Gayatrigaaru,Namaskaram.The Photos and the notes below are excellant.Yesterday evening I was in Sri Ramanashramam, Thiruvannamalai with my family and grand childrenwe We have seen two beutiful peacocks and thir family also.I got acouple of photos of them taken last year at the same place.At present I do not know how to upload them.soon I may send them for ur records.Kavyakantha vasishta Ganapathimuni gaaru describes Uma as "Kekiloka chakravarthi vahanena Puthrini,varanaari saarwabhouma Vahana Gathirmama(Umasahasram 9-4-1).If u delve deep in to the meaning there is a lot more than that meets the eye.-Ganti Lakshmi Narasimha Murthy

Namaskaram! Thank you very much! I have seen the Ramanashram peacocks when I had been there! I am very eager to read "Uma Sahasram". I understand about what you mean, about delving deep for actual meaning. Kindly let me know where I can get this book!
Regards,
Gayathri

Dear Mr.Arnold,
I am very happy that you like my blog. Hope you like it better with every visit!
Regards,
Gayathri

Dear Gayathrigaaru, Namaskaram, Umasahasram is available in Devanagari with English transliteration in volume I of collected works of Kavyakantha vasishta Ganapathi Muni publsihed by Ramanashramam,Thiruvannamalai.It contains all the stotras about "UMA".The Telugu version is also available with them commentary written by Sri Panyala Subrahmanyabhat.Another Telugu version is available with Ramana Bhaktha Mandali, Vaani nagar,Malkajgiri,Hyderabad.The Telugu poetic translation is not now in print(by Pantula Lakshminarayan sashtry)-Blessings -Murthy

Thanks and regards
V Prasanna Shrinivas

Dear Sri.Prasanna Shrinivas,
I thank you so very much for the link! I have been in search of this text for quite a long time! Very kind of you!
Kind regards,
Gayathri

We will immensely benefit if the consort of the Lord who, by His mere association, transforms the meanest of creations into auspicious ones and worthy of worship (like the moon- often compared to the one with blemishes, the snake used as a comparison for people that have "double-tongue" and the bull/pashu - often sighted as an example for the one who lacks discrimination) inspire you to write a commentary on umA sahasram so that simpletons like me get transformed into those worthy of His grace and association.

Thanks and regards
V. Prasanna Shrinivas

Dear Sri.Prasanna Srinivas,
I shall first go through "Uma Sahasram" and see if I could make a suitable posting of the same.
I agree with the concept mentioned by you. Thankyou and regards,
Gayathri