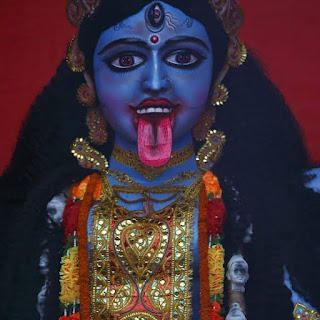 THE UNITY OF THE TIP OF THE TONGUE WITH THE UVULA (LITTLE TONGUE) IS SYMBOLIC OF LOW ENERGY UNITING WITH SUPER CONSCIOUSNESS. THIS IS THE UNION WHICH PRODUCES THE AMRUTHAM (NECTAR).

The Inner Veena (Human Spinal chord)- I realized that the mantropadesham (initiation in mantra) I had received from the Shankaracharya of Shakatapuram Mutt and the Khechari Mudra upadesham from an unknown yogi in Tiruvannamalai were meant for the activation of the 'vina' of Upanishads (veena dandi which is equal to the human spinal chord).

The Veena Syamala mantra as well as the khechari mudra tap the kundalini energy raising it upwards from the muladhara to the sahasrara chakra through the sushumna nadi. Veena, when played with involvement gradually slows down the inhalation and exhalation of the player. As the breathing slows down even further, the sushumna nadi (between the ida and pingala nadis) is activated. Khechari mudra, which is a hatha yoga practice activates and elevates the kundalini shakthi. Khechari mudra's main objective is for the tip of the tongue to touch the uvula (little tongue) or even further behind into the nasal cavity. By achieving this,  one is able to direct the pranic energy from senses into the spinal chord and from there draw it upwards through the chakras towards the ultimate bliss of Universal Consciousness.

In one of my innumerable meetings with Sri.Sivananda Murthy of Bhimli, he told me there was another method to activate the uvula centre. He showed me the image of Goddess Kali. He said practice of putting out the tongue as further down as possible, and vocally hitting the lowest octaves (never mind the guttural sounds) and by sustaining the notes for long periods one can open the storehouse of Universal Knowledge which is locked right behind the uvula!!