Lord Shiva's poetic hymn on Radha and Their knowledge of veena! 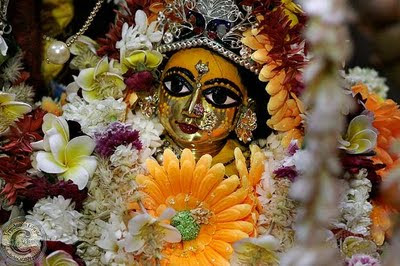 Brahma Samhitha (5.45) compares Lord Shiva to yoghurt and Lord Krishna to milk, to emphasise that they are one and the same.The followers of Gowdiya Vaishnavism also worship Lord Shiva,whom they consider as a counterpart of Lord Krishna.On the auspicious night of Shivarathri, the Krishna devotees offer "pradakshinam" to the Radha Kund and to the Saivaite temples in the village. It is a colourful festival,with devotees singing the hymns and praises of Lord Shiva as they offer their circumambulation.

Further,the followers of Gowdiya Vaishnavism claim that Lord Shiva as Gopeshwar had participated in the "Rasa Leela".Once while meditating,Lord Shiva was captivated by the sweet music from the flute of Lord krishna.This music had led Him to the state of 'samadhi.'Lord Shiva,curious to find out the origin of the divine music from the flute,followed the tone all the way upto Vrindavan where He found Lord Krishna in Rasa Leela.
Desiring to participate in the Rasa Leela,He was advised by Vrinda Devi to bathe in Mansarovar to take the form of a female.
Lord Shiva danced amidst the gopis as a beautiful woman,but He was identified by Lord Krishna and given the name of Gopeshwar.
Even now Lord Shiva is worshipped in Vrindavan as Gopeshwara in the mornings (in linga form) and in the evenings the linga is decorated as a beautiful woman and worshipped as a Gopi.
In the Urdhvamnaya Tantra,none other than Sri Vyasa Maharishi had himself recorded the following Radha Kripa Kataaksha Stotram as told by none other than Lord Shiva Himself!
RADHA KRIPA KATAKSHA STOTRAM:-
1)Muneendravrundavandithe Thrilokashokahaarini
Prasannavakthrapankaje Nikunjabhoovilaasini
Vrajendrabhaanunandini Vrajendrasoonusangathe
Kadaakarishyaseehamaam Krupaakataakshabhaajanam!


Bhaveththadaiva Sachchithathriroopakarmanaashanam
Bhaveththadaa Vrajendrasoonumandalapraveshanam!
According to ancient Hindu texts,Rudra means Shiva and rudra veena was played by Lord Shiva.The first rudra veena was made by Lord Shiva using His own intestines as strings! Even Goddess Radha was known for Her exepertise on veena and the veena which She played was known as the rudra vallaki.
Devotees who recite the above stotra on full moon days, the eighth,tenth,eleventh and thirteenth thithi after the waxing and waning moon will be blessed by Goddess Radha's kripa in the form of overflowing love and inexplicable sublime joy of "prema" for Lord Krishna.The best path to reach God is through "Nayika Tattvam" which will be showered on the devotee in abundance by reciting the kripa kataksha stotram of Goddess Radha!