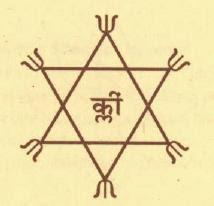 YANTRA FOR SLOKA NO.3.
SLOKA NO.3:-
"Avidyaanaamanthasthimiramihiradweepanagari
Jadaanaam Chaithanyasthabakamakarandashruthijhari!
Daridraanaam Chinthaamanigunanikaa Janmajaladhau
Nimagnaanaam Damshtraa Muraripu Varaahasya Bhavathi!"
Literal Meaning: "The dust of Thy lotus-feet is the Island City, wherefrom takes place the luminous sun-rise of spiritual illumination driving away the over-casting darkness of ignorance in the hearts of the devotees. It forms the cluster of flower buds from which gushes forth the nectar of intelligence. enlivening the dull-witted. It is a veritable necklace of wish-yielding gems for the poverty-stricken. And for those immersed in the ocean of wordly affairs, it becomes their uplifter like the Tusk of Vishnu, which raised the earth from submergence in pralayaa waters when He incarnated as the Cosmic Boar."
Moda of worship: Yantra to be made on a gold plate.Sit facing North-East. Chant the sloka 2000 times (1008) daily, for 45 (54,15) days.
Archana: Chant Lalitha Trishathi offering white flowers such as jasmine, etc.
Offerings: Cooked rice, cakes of black gram, honey and betels with slices of areca nut.
BENEFICIAL RESULTS:Attainment of versatile knowledge, particularly of Vedas.
Literal Results: This sloka is a remedy for people who are weak in grasping and memory power. Extremely helpful in enhancing performance levels in academics. Atleast a recitation of 11 times a day will bring remarkable changes in a dull student. It is also important to note that the key objects mentioned in all slokas would bear fruit. In this particular sloka, the mention of gems and necklace would yield results as sloka attains power through chanting.This is also a prayer to one of the Dasavatharas of Lord Vishnu,the Varaha Avathaara!
at August 18, 2009

dear mam,
that is fine mam
with love
mala

This looks interesting but just like a lamp can be lighted from another lamp, this mantra shastra has to be obtained from a Guru who himself has got siddhi of it.

And when speaking about Lalitha Trishathi, it is really one of the most poweful stotras and also secret of all secrets where there is nothing beyond it. Hence even speaking about it is forbidden, unless told by a Guru who himself is a Sri Vidya Upasaka & who has got siddhi in it. Even slokas from Soundarya Lahari needs initiation for getting siddhi within 45 days or whatever is said of. Tripurasundhari will not give siddhi for those men who dont follow nithya-karmas & respect Guru or for those women who dont behave according to shastras/husband/parents.

Best is to surrender to Tripurasundhari wholly, completely and forget about the rest.

Dear Sri.Neeraj, I do appreciate and agree with your analysis.

I truely appreciate your great job of spreading the awareness of soundarya lahari sloka to more people through this blog.
I have a very good and kind mother, but my father never understand s her and always fights with her and her relatives. Also he is a responsible father but not someone who loves his family. I want a sloka to recite on behalf of my parents, so that my father loves us all and so our home - really feels like a home.
Although I cannot perform pooja because I stay in a hostel, I would like to chant them with true heart.

Can I recite this sloka on behalf of my daughter who has weak grasping power and memory .. Please let me know ... Awaiting your reply anxiously ...

What are black gram cakes

what is difference between Benefical results and Literal results.

what is difference between Benefical results and Literal results.