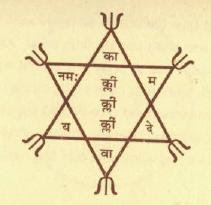 YANTRA FOR SLOKA NO.18
SLOKA NO.18:-
"Thanuchchaayaabhisthe Tharunatharanishreesaranibhihi
Divam Sarvaamurveemarunimanimagnaam Smarathi Yaha!
Bhavanthyasya Thrasyadvanaharinashaaleenanayanaaha
Sahorvashyaa Vashyaaha Kathi Kathi Na Geervaanaganikaahaa!"
Literal Meaning:"How can numerous celestial courtesans including Urvashi, with eyes bashful like those of a frightened deer of the forest, do not become fascinated by a person who meditates on the beauty of Thy form which bathes the heaven and the earth in its crimson radiance resembling the rising sun!"
Mode of worship:Yantra to be made on gold or copper plate. Sit facing North-East. Chant this verse 1000 times daily for 45 days.
Archana: Chanting of Laitha Ashtotharam and Saraswathi Ashtotharam offering champaka or jasmine flowers.
Offerings:Milk, honey, bits of sugar and cooked rice.
BENEFICIAL RESULTS: Deep knowledge in sciences, getting good bridegrooms in the case of marriageable women and blessings of great men.
Literal Results:Adds lustre and magnetism to body and face. The double "vashya" in the sloka creates magnetic aura around the devotee, 'the rising sun' in the sloka implies new beginnings. This sloka is also a prayer to the planet, Sun (if misplaced in horoscope or debilitated or during Surya Mahadasa).
at August 22, 2009

Hello gayatri mam,
After chanting this sloka, will I get the person whom I love and get married to the same person?