Points to note about SL slokas and yantras.

By placing the Goddess in the heart region while chanting the chosen sloka, the wise practitioner superimposes the Divine Mother on his/her jeevatma and allows Her to take over. There could be no better meditation than that!
While meditating and chanting (mentally after 11 times of loud chanting), the content of the sloka describing the Goddess, gradually starts applying itself to the practitioner as well, as he/she is replaced by the supremacy of the Divine Mother by placing Her in the heart region. Therefore, the overall meaning and the essence of the concerned sloka begin to unfold in the life/nature/and quality of the practitioner too! The devotee witnesses the meaning of the sloka manifesting in his/her life.
The above is easier said than done. For perfect meditation, it is necessary to "believe" that Goddess is certainly within oneself, and while mental chanting, it is important to curb the movements of the tongue. Ultimately, it helps a great deal to develop love and adoration for the Goddess. Bhakthi is misinterpreted as respect and most of us pray in fear and great reverence of our chosen deity. The devotee should feel overflowing love for Her and a joyous reciprocation coming from Her. This interacation between the devotee and the Goddess should be felt by the former as a secret that no one knows of ! The practice of such feelings gradually enlightens the devotee and it finally dawns on him/her that the carefully woven fantasy and the delicious Truth are one and the same!
First and foremost, it is essential to start by praying to one's chosen Guru, and who better than the author of this most aesthetic creation, Sri Adi Sankaracharya?
When the body feels heated or feverish, a simple offering of a quarter glass of boiled milk with raisins and sugar-candy (atleast 16 to 20 raisins and 10 pieces of kalkand) should be given to the Goddess and consumed by the devotee. Chanting of Sri Lalitha Sahasranamam will also help in balancing the chakras.
at August 19, 2009

Dear Gayathri ji,
Very informative articles. Looking forward to more, esp. ones on vocal music. You have described bhakti so beautifully. A prayer full of bhakti would be indeed 'overflowing love' towards the deity as you said and not 'fear'. In most compositions, the vaggeyakaras address the deity in the kriti as 'neevu' and not 'meeru'. So intense and close (to the deity) is their bhakti.
Eagerly waiting for more :)
Thank you,
Music Lover

Dear mam
We are really gifted by this article as u share yr experience with us. First when I started chanting without knowing meaning of the slokam I didnt have a feeling, I felt the difference when I chanted knowing the literal meaning of the same. This was the article I expected from you mam thank u very much. I want to know one thing whether these slokams can be played in veena since each one slokam has its own ragam and how it is to be done.
with love
mala

Hi VG Ji,
Your articles on SL are always inspiring. In fact, after gonig through one of your earlier articles on SL, my husband regularly recites the 7th sloka to nutralize the effects of Rahu.
Your blog in a treasure-house of knowledge!!
Warm Regards,
Mythili

Dear Mrs. Mythili,
I feel rewarded that my articles are serving the entire purpose. I pray that your husband should yield the best benefits of sloka 7 to mitigate any evil effects of Rahu mahadasa, and enhance the positive outcome.
Thank you and warm regards,
Gayathri

Dear Music Lover,You are right, the best of bhakthi is in feeling one with the deity, the more formal we feel, that much more distant we are to the deity.
Exactly the reason why the enlightened composers take liberties, (in the case of Bhaktha Ramadas, he even scolds Lord Rama for not coming to his rescue)in addressing their chosen deities. Thank you very much,
Gayathri

Dear Mrs.Mala,I am happy that you are enjoying your sloka parayanam by knowing the meaning. It is possible to compose any sahithyam in music form and play the same on veena too!Thank you and love, Gayathri

what a person you are to reply to every blog that is posted on your site. I have decided to chant 6th shloka for my infertility issue. I want to avoid IVF at any cost. I hope devi blesses me and does a miracle to me.

Loved this article and felt goose bumps reading about the concept of allowing the Goddess to take over. 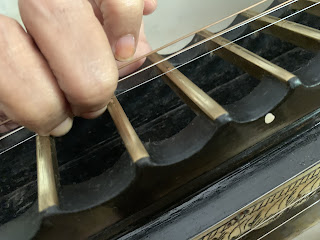