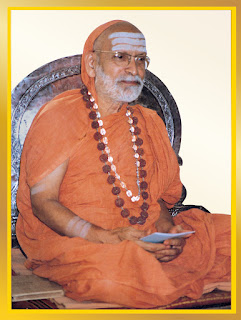 35TH JAGADGURU OF SRINGERI SHARADA MUTT, PUJYASRI ABHINAVA VIDYATHEERTHA MAHASWAMI WHO BESTOWED THE NAME OF 'SRI VIDYARANYA' TO BHAGAVANJI IN THE YEAR 1962, DURING BHAGAVANJI'S 'SANYASA SWEEKARANA' CEREMONY.
(The slokas below pointing to women are also applicable to men)

Meaning-Whether man is extremely knowledgeable in sciences, or an expert in yogic practices or is valorous in battle systems, he is still a slave of woman (due to inability to control mind).

Meaning-Even though mind has awaken from the slumber of ignorance, is aspiring for salvation, is tranquil, and is conditioned through the training of the Spiritual Master, is yet susceptible to and becomes contaminated due to the company of woman.

Meaning- Due to the company of, mingling with and meeting with sensuous and beautiful women even the most austere aspirant in the advanced path of spiritual practices will lose his spiritual strength and power.

Meaning- Only the imaginative expression of a poet depicts woman as sensuous and beautiful, whereas knowledgeable scholars who discriminate woman as a constitution of flesh and bones are not attracted to her.

Meaning- Whether man has complete control of his senses, is highly qualified (scientist), a renowned scholar who is aware of "maya" (illusion) and its effect, even though he resists the temptation of woman, he is still deluded into desiring the company of woman.

Meaning- Man develops implicit trust in even the most destructible woman and enjoys a relationship with her. Ironically he is cheated by the same woman who he trusts the most.

Meaning- The force of lust (sex drive) is strong. It is extremely powerful and the speed is absolutely difficult to arrest. Yogi, through his practices is able to control the force and speed to some extent, but the irresistible force blossoms repeatedly again and again, and destroys the strength and power of the yogi.

Meaning- People through their words and poetry express their victory over Manmadha (God of Love), but in thoughts and actions they worship Manmadha (in other words they are captivated by Manmadha in thought and action).

Meaning- Please realize that lust is a result of material attachment, lust is insatiable, it is the residence of sins (that keeps man away from liberation), lust is the reason for the material world, it is an epitome of sin and can never be appeased.

Meaning- Man is ignorant and foolish due to youth and enjoyments which are temporary, he is arrogant due to good health and strength. He wastes precious and divine life through sexual and material pleasures.

Meaning- When man who earns a wife, children, houses and material pleasures is very satisfied by such achievements and is not interested in inquiry of the Supreme Truth, such a man's birth (life as human) is absolutely wasted and of no use.