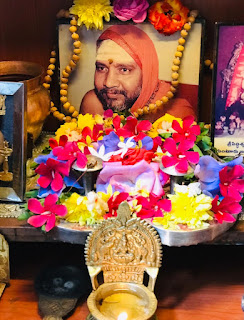 Bhagavanji in His poorvashram refused to appear for examinations at the end of the Intermediate course. He had already showed sparks of spiritual awakening. He started writing "SARVAGNYOHAM" and "VIDYAARANYOHAM" on books and papers.

Meaning- Female copulates with male even if they are animals or birds. An ignorant man also behaves like them. Only the knowledgeable man becomes averse to the pleasures of woman.

Meaning- The fickle mind desires and visualizes sexual union with something that decays and perishes. With efforts the mind must reject the desire to gain entry into the path of salvation.

Meaning- Man's karmendriyas (speech, hands, legs, anus and genitals) are bound by his craving for material/sexual pleasures. He sports thus in the kingdom of his mind and becomes weak and afflicted by diseases.

Meaning- Know that the misery of taking birth (being born) is equal to all, whether one is a king, an affluent person, a handsome man, an intelligent man or a weak person (for all kinds of people).

Meaning- Even the beautiful become old, even the strong die and the rich become desperate. When such is the truth why are learned people in delusion?

Meaning- People who are extremely foolish due to their attachment to physical body, who are tormented by desires and ambitions and who are satiated by love and passion- they all drown in the ocean of  corporeal existence.

Meaning- Man loses all the credit he has gained from good deeds of past lives by giving into momentary emotions resulting in uncontrollable anger or desire. He also distances himself from the prosperity that future would bring.

Meaning- The danger of momentary negligence causes destruction of spiritual penance of earned over a very long time. Therefore there is no death worse than negligence. Such a negligence destroys peace and knowledge.

Meaning- A man who lacks wisdom is deluded and attached to the physical body which is a mechanism of bones, sheathed by lustrous skin.

Meaning-  Even Lord Indra (Lord of Devas) bows down to a  man who views a youthful woman, a girl child and an old woman unaffectedly and dispassionately.

Meaning- What is the use of enjoying sensory pleasures when life itself is uncertain? Therefore all pleasures are temporary and man should strive for eternal bliss.

Meaning- Human beings are greatly magnetized by momentary pleasures of the senses. They do not realize the speed of  the passing time towards death.

Meaning- People are like various types of actors who are dressed accordingly in a theatre-like world. They come to this world as actors performing different roles and then they depart. (By departing repeatedly human beings are prolonging the state of impermanence).