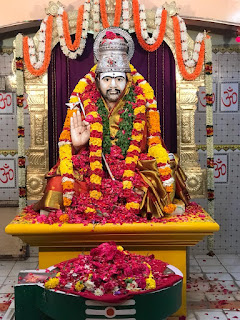 In 1966 when Sringeri Mahaswami (Pujyasri Abhinava Vidyatheertha Mahaswami) was performing the "Chathurmasya Deeksha" in Ujjain, Bhagavanji also wanted to perform the Chathurmasya Deeksha along with Mahaswami. He  took along with Him the member of Bharathiya Sujana Sevaka Samajamu",  Sri.Tangirala Seetha Ramanjaneyulu and introduced Him to Sringeri Mahaswami. Sri. Tangirala Seetha Ramanjaneyulu is none other than the 37th Acharya of Sringeri Sharada Peetham, Pujyasri Bharathi Theertha Mahaswami.

Meaning- A devotee who has fixed his mind on Me, even though he is rejected by all people in different ways causing him untold sufferings, he is still not afraid of them and will never ever give up his devotion for Me.

Meaning- After taking refuge in Me who am the Supreme God, whoever distrusts Me again, such a man will never find a protector. Whoever has doubts about the Supreme God will certainly be destroyed.

Meaning- When one obstructs My devotee from worshipping Me he loses even the credit he has earned through good deeds in the past. This kind of loss occurs due to one's own wrongdoing.

Meaning- Whoever causes trouble to my devotee will be firmly imprisoned by the shackles of the world. The virtuous one who makes my devotee happy will attain liberation along with my devotee.

Meaning- I can endure any offence against me by evil people. But I will not tolerate in the least the evil actions against saints and saintly people.

Meaning- "O Lord, I am Yours!" whoever utters these words and seeks refuge in Me with a full and open heart, I accept him with a  benevolent view and instantly make him attain the fearless state of liberation.

Meaning- Devotee offers fruit, flowers and leaves (phalam-pushpam-thoyam) to Me with utmost devotion. But his heart (mind) which is attached to his offerings are most precious to Me. Therefore O devotee, to please Me offer your heart to Me!

Meaning- O Man! Do not hesitate to worship Me who Am the Greatest of the great, the First Lord of all worlds (Mahavishnu) and the hearts of all living beings being my Abode.

Meaning- The intelligent man seeks refuge in Me who Am the Greatest of the great and attains Supreme Bliss which is indestructible. By rejecting Me with arrogance he attains the horrifying path of hell.